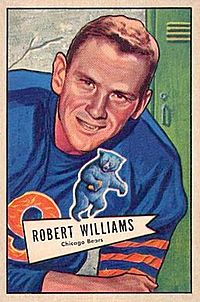 Robert "Bob" Allen Williams (January 2, 1930 – May 26, 2016) was an American football quarterback in the National Football League. He was born in Cumberland, Maryland. Williams played for the Chicago Bears from 1951 through 1952 and again in 1955. During his college years, he played for the Notre Dame Fighting Irish team. Williams was inducted into the College Football Hall of Fame in 1988.

Williams died on May 26, 2016 at a retirement home in Timonium, Maryland from Parkinson's disease, aged 86.

All content from Kiddle encyclopedia articles (including the article images and facts) can be freely used under Attribution-ShareAlike license, unless stated otherwise. Cite this article:
Bob Williams (quarterback) Facts for Kids. Kiddle Encyclopedia.