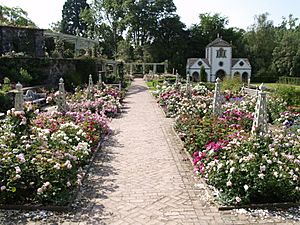 Founded in 1874 and developed by five generations of one family, it was gifted to the National Trust in 1949. The garden spans 80 acres of hillside and includes formal Italianate terraces, informal shrub borders stocked with plants from around the world, The Dell, a gorge garden, a number of notable trees and a waterfall. Since 2012, new areas have opened including the Winter garden, Old Park Meadow, Yew Dell and The Far End, a riverside garden. Furnace Wood and Meadow opened in 2017. There are plans to open more new areas, including Heather Hill and Cae Poeth Meadow.

Bodnant Garden was visited by over 270,000 people in 2019 and is famous for its Laburnum arch, the longest in the UK, which flowers in May and June. The garden is also celebrated for its link to the plant hunters of the early 1900s whose expeditions formed the base of the garden's four National Collections of plants – Magnolia, Embothrium, Eucryphia and Rhododendron forrestii. 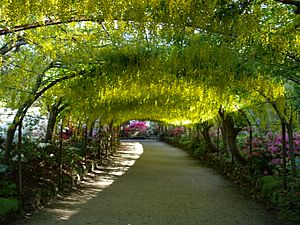 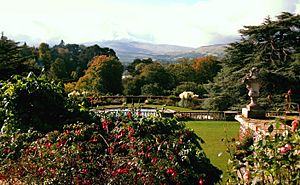 View of mountains from The Terraces 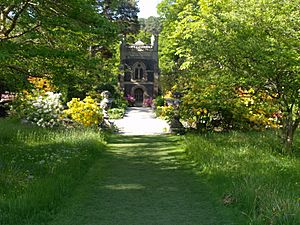 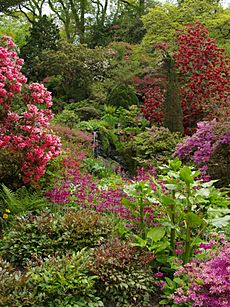 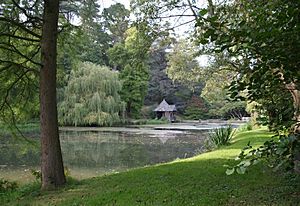 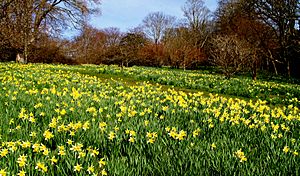 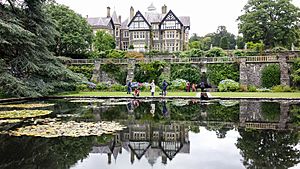 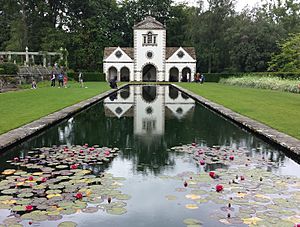 The Pin Mill and Lily Pond

The garden's founder, Henry Davis Pochin, was a Leicestershire-born Victorian industrial chemist who acquired fame and fortune inventing a process for clarifying rosin used in soap, turning it from the traditional brown to white. He became a successful businessman, mayor and JP. Pochin bought the Bodnant estate in 1874 and employed Edward Milner, apprentice to Joseph Paxton, to redesign the land around the existing Georgian mansion house, then just lawns and pasture. Together Pochin and Milner relandscaped the hillside and valley, planting American and Asian conifers on the banks of the River Hiraethlyn to create a Pinetum, and reinforcing stream banks to create a woodland and water garden in the valley, in the style of the garden designer of the day William Robinson in his book The Wild Garden. In the upper garden, Pochin and Milner created the Laburnum Arch and glasshouses, to house exotics. Pochin also built "The Poem", the family mausoleum in an area of the Shrub Borders.

The development of the garden was continued by Henry and Agnes Pochin’s daughter Laura McLaren, Baroness Aberconway, who married Charles McLaren, 1st Baron Aberconway. Laura, like her mother, was a campaigner for women's suffrage and founded the Liberal Women's Suffrage Union. She was also a passionate gardener and inspired her son Henry McLaren, 2nd Baron Aberconway, to whom she entrusted the care of the garden in 1901. Together they created the Skating Pond at the Far End and began work on the Italianate Terraces. Henry McLaren oversaw the major developments of the garden. He sponsored plant hunting expeditions of the day by explorers such as Ernest Wilson, George Forrest and Frank Kingdon-Ward who brought back plants from the China and the Himalayas including magnolias, camellias and rhododendrons. He also invested in a plant breeding programme producing Bodnant hybrid rhododendrons.

From 1905 to 1914 Henry oversaw the completion of the five terraces. This was a massive earth-moving project done by men without machinery, which involved levelling the hillside and building granite buttress walls which provided protection for tender plants being introduced to the garden from overseas. The Pin Mill building on the Canal Terrace was added in 1938. Originally built in 1730 in Gloucestershire, it was rescued from decay by Henry, who dismantled it, brought to Bodnant and rebuilt it brick by brick.

Henry went on to become president of the Royal Horticultural Society for 22 years. He persuaded the National Trust to accept gardens on their own merit and in 1949 he handed over Bodnant Garden to the National Trust, the second garden after Hidcote.

On August 18th 1952 Vita Sackville-West and husband Harold Nicolson were given a day long conducted tour by Henry. Nicolson commented in his diary "the Dell, is the most extensive, most varied and most tasteful piece of planting I have ever seen". He further commented "I have no doubt at all that this is the richest garden I have ever seen. Knowledge and taste are combined with enormous expenditure to render it one of the wonders of the world".

Throughout the 1900s the continued development of the garden was a partnership between three generations of the McLaren family – Henry, Charles and Michael – and three generations of head gardeners Frederick, Charles and Martin Puddle. Like his father, Charles McLaren became president of the RHS in 1961. As was his father and grandmother, he was also awarded the highest accolade of the RHS, the Victoria Medal of Honour. Charles’ sister Dr Anne McLaren was one of Britain's leading scientists. She pioneered techniques of reproductive biology which led to in vitro fertilisation (IVF) and cancer research.

Charles’ son Michael McLaren inherited the property in 2003. He is a practising barrister and continues to act as garden manager. Troy Scott Smith took over as head gardener in 2006 and the position of head gardener was taken over in 2015 by John Rippin.

Bodnant Garden has an illustrious connection with 19th and early 20th century explorers, who brought back plants for which the garden is now world-famous, including four National Collections, of Rhododendron forrestii, Magnolia,Eucryphia and Embothrium species. Today the garden also has twenty two Champion Trees, noted for their age, height and horticultural merit.

The next phase of plant hunting was under Pochin's grandson Henry McLaren, 2nd Lord Aberconway who sponsored expeditions from the Edwardian period which brought in large numbers of rhododendrons, camellias and magnolias to Britain. Notable plant hunters connected to Bodnant Garden included Ernest Wilson, who travelled extensively in China. He was first engaged by famous Veitch Nursery with the specific task of bringing back seeds of the Handkerchief Tree (Davidia involucrata), one of which still grows in Bodnant Garden's Shrub Borders. He also brought back many magnolias for which the garden is famous, and other trees including the Acer griseum, Meliosma beaniana and Sorbus meliosmifolia. Wilson also discovered and brought back the Lilium regale which now grow on the rose terraces.

In 1917 the recently formed Rhododendron Society, of which Lord Aberconway was a prominent member, employed plant hunter George Forrest to source rhododendrons. Forrest was a seasoned explorer who collected plants in western China and Tibet for nursery owner Arthur Bulley. His expeditions brought back seed of many new rhododendrons and Bodnant's gardeners were able to raise the plants in great numbers. Lord Aberconway and his head gardener Frederick Puddle set about hybridising the new rhododendron species they had raised, to create the Bodnant Hybrid Rhododendrons, of which the garden has around 350. Forrest also brought back to Bodnant Garden seed of Primula bulleyana still seen around the garden.

Frank Kingdon-Ward conducted numerous expeditions to the Himalayas during the 1920s and 1930s which resulted in the introduction of a prolific number of new species to Bodnant Garden including the Himalayan Blue Poppy (Meconopsis betonicifolia). He also collected and introduced rhododendron including Rhododendron cinnabarinum ‘Orange Bill’.

In 1925 Harold Comber was sponsored by garden owners calling themselves the Andes Syndicate, headed by Lord Aberconway, to travel in South America. This gave Bodnant the basis of two of its national collections, the Chilean Flame Tree (Embothrium coccineum) and Eucryphia. Great care was taken to protect some of Harold Comber's other introductions from South America, many of them were planted against a sheltered wall behind the Laburnum Arch. Some of Comber's plants still grow there today, such as the Crinodendron patagua and Desfontania spinosa.

All content from Kiddle encyclopedia articles (including the article images and facts) can be freely used under Attribution-ShareAlike license, unless stated otherwise. Cite this article:
Bodnant Garden Facts for Kids. Kiddle Encyclopedia.