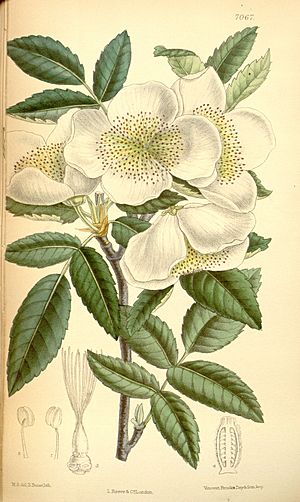 Eucryphia is a small genus of trees and large shrubs native to the south temperate regions of South America and coastal eastern Australia. Sometimes placed in a family of their own, the Eucryphiaceae, more recent classifications place them in the Cunoniaceae. There are seven species, two in South America and five in Australia, and several named hybrids.

They are mostly evergreen though one species (E. glutinosa) is usually deciduous.

The leaves are opposite, and either simple or pinnate with 3-13 leaflets. The flowers are produced in late summer or autumn, are showy and sweetly scented, 3–6 cm diameter, with four creamy-white petals, and numerous stamens and styles. The fruit is a woody capsule 1-1.5 cm long containing several seeds, and maturing in 12–15 months.

The nectar of two of the species provides an important sources of honey. Eucryphia lucida from Tasmania is the main source of a very distinctively flavoured honey known as Leatherwood (the common name for the species). Some of this honey may come from the other Tasmanian species, E. milliganii. In Chile, Ulmo honey (again after the local species name) comes from E. cordifolia. Leatherwood honey and Ulmo honey are very similar in flavour, even though the two species have probably been separated for more than 45 million years.

The generic name is derived from the Greek for "well hidden".

The species and their hybrids are attractive small trees for gardens, typically with a slender conic crown when young, though widening with age. They are valued for their conspicuous scented flowers, produced in late summer and autumn when few or no other trees are in flower. Cultivation is restricted to areas with mild winters, cool summers and good rainfall; away from their native areas, this restricts them to the Atlantic coastal regions of Europe, the Pacific Northwest of North America, and New Zealand.

All content from Kiddle encyclopedia articles (including the article images and facts) can be freely used under Attribution-ShareAlike license, unless stated otherwise. Cite this article:
Eucryphia Facts for Kids. Kiddle Encyclopedia.