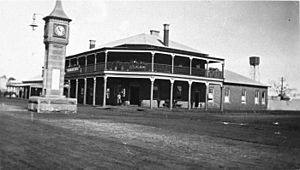 Bogan Gate is a small village in Parkes Shire of the Central West of New South Wales, Australia. At the 2011 census, Bogan Gate and the surrounding area had a population of 307. Bogan Gate is derived from the local Aboriginal word meaning "the birthplace of a notable headman of the local tribe".

The village lies in wheat and sheep growing country and is on the Sydney - Broken Hill rail line, and it is the junction for the Bogan Gate–Tottenham Branch line.

All content from Kiddle encyclopedia articles (including the article images and facts) can be freely used under Attribution-ShareAlike license, unless stated otherwise. Cite this article:
Bogan Gate Facts for Kids. Kiddle Encyclopedia.