Boile Run (also known as Boyle Run) is a tributary of the Susquehanna River in Northumberland County, Pennsylvania, in the United States. It is approximately 4.7 miles (7.6 km) long and flows through Lower Augusta Township. The watershed of the stream has an area of 5.97 square miles (15.5 km2). The stream is not designated as an impaired waterbody and is a relatively small stream. There was a mill on Boile Run in the second half of the 1800s and several bridges have been built over the stream. Its watershed is designated as a Warmwater Fishery and a Migratory Fishery. 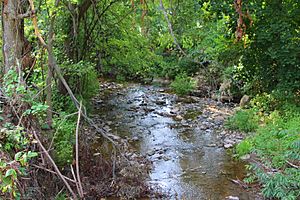 Boile Run is not designated as an impaired waterbody. At least one person has a National Pollutant Discharge Elimination System to discharge sewage into an unnamed tributary of the stream from a single residence.

The watershed of Boile Run has an area of 5.97 square miles (15.5 km2). The stream is entirely within the United States Geological Survey quadrangle of Sunbury. Its designated use is for aquatic life.

Boile Run is one of two major creeks in Lower Augusta Township, the other being Hallowing Run.

The original spelling of the stream's name was "Boile Run"; this was corrupted to "Boyle Run" on some maps, though the earlier name had appeared on maps as far back as 1874. In 1965, the USGS recommended that the name "Boile Run" be formally adopted. Many of the early settlers in the valley of Boile Run were of Scotch-Irish descent. John Snyder built a mill on the stream in 1858 and operated it until it burned down in 1880.

A bridge carrying State Route 4022 over Boile Run was slated for replacement in 2015.

The drainage basin of Boile Run is designated as a Warmwater Fishery and a Migratory Fishery.

All content from Kiddle encyclopedia articles (including the article images and facts) can be freely used under Attribution-ShareAlike license, unless stated otherwise. Cite this article:
Boile Run Facts for Kids. Kiddle Encyclopedia.