The bonefish (Albula vulpes) is the type species of the bonefish family (Albulidae), the only family in order Albuliformes.

Bonefish were once believed to be a single species with a global distribution, however 9 different species have since been identified. There are three identified species in the Atlantic and six in the Pacific. Albula vulpes is the largest and most widespread of the Atlantic species. 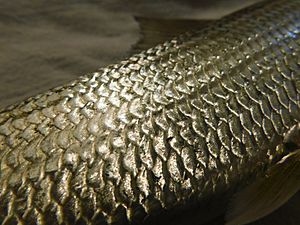 Scales of A. vulpes 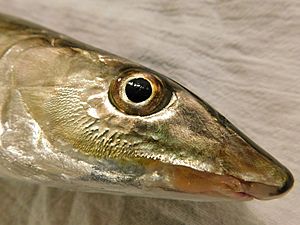 The bonefish weighs up to 14 lb (6.4 kg) and measures up to 79 cm (31 in) long. The color of bonefish can range from very silver sides and slight darker backs to olive green backs that blend to the silver side. Slight shading on the scales often lead to very soft subtle lines that run the flank of the fish from the gills to the tail. The bases of the pectoral fins are sometimes yellow.

Bonefish can live up to 20 years and reach sexual maturity at 2-3 years of age (when they’re over 17 inches long). Larvae drift for an average of 53 days. Juveniles often live over open sandy bottoms.

An amphidromous species, it lives in inshore tropical waters and moves onto shallow mudflats or sand flats to feed with the incoming tide. Adults and juveniles may shoal together, and mature adults may be found singly or in pairs.

The bonefish feeds on benthic worms, fry, crustaceans, and mollusks. Ledges, drop-offs, and clean, healthy seagrass beds yield abundant small prey such as crabs and shrimp. It may follow stingrays to catch the small animals they root from the substrate.

In the Los Roques archipelago bonefish primarily hunt glass minnows, however this behavior is atypical.

Bonefish are considered one of the premier fly and light tackle game fish. Fishing for bonefish, called bonefishing, is a popular sport in the Bahamas, Puerto Rico and southern Florida. Since bonefish live in shallow inshore water, fishing may be done by wading or from a shallow-draft boat. Bonefishing is mostly done for the sport, so the fish are released, but they may also be eaten in less developed areas. A typical Bahamian recipe is a split fish seasoned with pepper sauce and salt, then baked.

Bonefish are notoriously wary and great skill must be taken both in approach and presentation when fishing for them. English speaking fishermen often refer to them as “grey ghosts."

All content from Kiddle encyclopedia articles (including the article images and facts) can be freely used under Attribution-ShareAlike license, unless stated otherwise. Cite this article:
Bonefish Facts for Kids. Kiddle Encyclopedia.