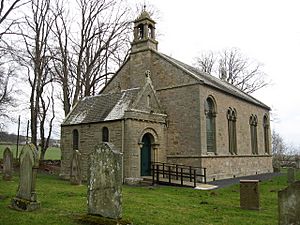 Bonkyl Church (also spelled Buncle or Bunkle) is a Church of Scotland kirk situated at 5 miles (8 kilometres) northeast of Duns in the old county of Berwickshire. The nearest hamlet is Preston just over 2 miles (3 kilometres) to the south-west.

There has been a religious establishment at Bonkyl since the early 12th century, and it was part of the vicarage of Dunkeld before 1275. The early proprietor of the church was Sir Alexander de Bonkyl, but the church passed into the care of John Stewart who married Alexander's daughter. John was the son of Alexander Stewart, 4th High Steward of Scotland. During the Second War of Scottish Independence the location was contested by Thomas Ughtred, a future Knight of the Garter. The care and maintenance of the church then passed to the Douglas Earls of Angus, descendants of the Stewarts, before finally passing to the Earl of Home in 1877. The church was a separate parish until 1621 when it was co-joined with the nearby parish of Preston. In 1958, the churches were joined by Reston, then Chirnside in 1973. The present church is a Category B listed building.

The ancient church at Bonkyl fell into ruin and was demolished in 1820 when the present church was built. All that is left of the old church is a Norman apse, a vaulted arch which was later used as a burial vault of the Homes of Billie. It is thought to be the oldest of its kind in Scotland, having been built in the early 12th century and is a designated scheduled monument.

Ministers in the early years of the reformed church

All content from Kiddle encyclopedia articles (including the article images and facts) can be freely used under Attribution-ShareAlike license, unless stated otherwise. Cite this article:
Bonkyl Kirk Facts for Kids. Kiddle Encyclopedia.