Francesco Borromini, byname of Francesco Castelli (25 September 1599 – 2 August 1667), was an Italian architect born in today's Ticino who, with his contemporaries Gian Lorenzo Bernini and Pietro da Cortona, was a leading figure in the emergence of Roman Baroque architecture.

A keen student of the architecture of Michelangelo and the ruins of Antiquity, Borromini developed an inventive and distinctive, if somewhat idiosyncratic, architecture employing manipulations of Classical architectural forms, geometrical rationales in his plans and symbolic meanings in his buildings. He seems to have had a sound understanding of structures, which perhaps Bernini and Cortona, who were principally trained in other areas of the visual arts, lacked. His soft lead drawings are particularly distinctive. He appears to have been a self-taught scholar, amassing a large library by the end of his life.

His career was constrained by his personality. Unlike Bernini who easily adopted the mantle of the charming courtier in his pursuit of important commissions, Borromini was both melancholic and quick in temper which resulted in him withdrawing from certain jobs, and his death was by suicide. 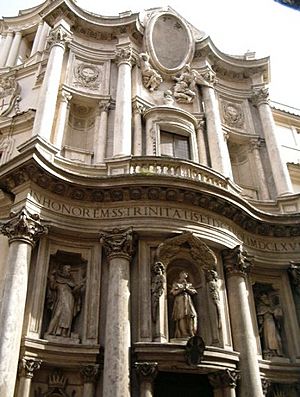 In 1634, Borromini received his first major independent commission to design the church, cloister and monastic buildings of San Carlo alle Quattro Fontane (also known as San Carlino). Situated on the Quirinal Hill in Rome, the complex was designed for the Spanish Trinitarians, a religious order. The monastic buildings and the cloister were completed first after which construction of the church took place during the period 1638-1641 and in 1646 it was dedicated to San Carlo Borromeo. The church is considered by many to be an exemplary masterpiece of Roman Baroque architecture. San Carlino is remarkably small given its significance to Baroque architecture; it has been noted that the whole building would fit into one of the dome piers of Saint Peter's. 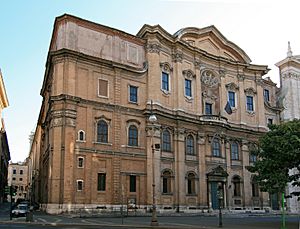 In the late sixteenth century, the Congregation of the Filippini (also known as the Oratorians) rebuilt the church of Santa Maria in Vallicella (known as the Chiesa Nuova -new church) in central Rome. In the 1620s, on a site adjacent to the church, the Fathers commissioned designs for their own residence and for an oratory (or oratorio in Italian) in which to hold their spiritual exercises. These exercises combined preaching and music in a form which became immensely popular and highly influential on the development of the musical oratorio.

The architect Paolo Maruscelli drew up plans for the site (which survive) and the sacristy was begun in 1629 and was in use by 1635. After a substantial benefaction in January 1637, however, Borromini was appointed as architect. By 1640, the oratory was in use, a taller and richer clock tower was accepted, and by 1643, the relocated library was complete. The striking brick curved facade adjacent to the church entrance has an unusual pediment and does not entirely correspond to the oratory room behind it. The white oratory interior has a ribbed vault and a complex wall arrangement of engaged pilasters along with freestanding columns supporting first level balconies. The altar wall was substantially reworked at a later date. 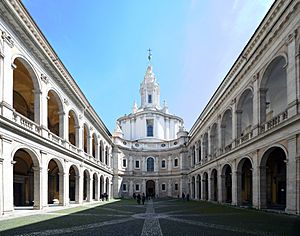 From 1640-1650, he worked on the design of the church of Sant'Ivo alla Sapienza and its courtyard, near University of Rome La Sapienza palace. It was initially the church of the Roman Archiginnasio. He had been initially recommended for the commission in 1632, by his then supervisor for the work at the Palazzo Barberini, Gian Lorenzo Bernini. The site, like many in cramped Rome, is challenged for external perspectives. It was built at the end of Giacomo della Porta's long courtyard. The dome and cochlear steeple are peculiar, and reflect the idiosyncratic architectural motifs that distinguish Borromini from contemporaries.

Borromini was one of several architects involved in the building of the church of Sant’Agnese in Agone in Rome. Not only were some of his design intentions changed by succeeding architects but the net result is a building which reflects, rather unhappily, a mix of different approaches.

The decision to rebuild of the church was taken in 1652 as part of Pope Innocent X’s project to enhance the Piazza Navona, the urban space onto which his family palace, the Palazzo Pamphili, faced. The first plans for a Greek Cross church were drawn up by Girolamo Rainaldi and his son Carlo Rainaldi, who relocated the main entrance from the Via di Santa Maria dell'Anima to the Piazza Navona. The foundations were laid and much of the lower level walls had been constructed when the Rainaldis were dismissed due to criticisms of the design and Borromini was appointed in their stead.

Borromini began a much more innovative approach to the facade which was expanded to include parts of the adjacent Palazzo Pamphili and gain space for his two bell towers. Construction of the façade proceeded up to the cornice level and the dome completed as far as the lantern. On the interior, he placed columns against the piers of the lower order which was mainly completed.

In 1656, Innocent X died and the project lost momentum. In 1657, Borromini resigned and Carlo Rainaldi was recalled who made a number of significant changes to Borromini's design. Further alterations were made by Bernini including the façade pediment. In 1668, Carlo Rainaldi returned as architect and Ciro Ferri received the commission to fresco the dome interior which it is highly unlikely that Borromini intended. Further large scale statuary and coloured marbling were also added; again, these are not part of Borromini's design repertoire which was orientated to white stucco architectural and symbolic motifs.

The Re Magi Chapel of the Propaganda Fide

The College of the Propagation of the Faith or Propaganda Fide in Rome includes the Re Magi Chapel by Borromini, generally considered by architectural historians to be one of his most spatially unified architectural interiors.

The chapel replaced a small oval chapel designs by his rival Bernini and was a late work in Borromini's career; he was appointed as architect in 1648 but it was not until 1660 that construction of the chapel began and although the main body of work was completed by 1665, some of the decoration was finished after his death.

His façade to the Via di Propaganda Fide comprises seven bays articulated by giant pilasters. The central bay is a concave curve and accommodates the main entry into the college courtyard and complex, with the entrance to the chapel to the left and to the college to the right.

Borromini on a 100 francs note

All content from Kiddle encyclopedia articles (including the article images and facts) can be freely used under Attribution-ShareAlike license, unless stated otherwise. Cite this article:
Borromini Facts for Kids. Kiddle Encyclopedia.