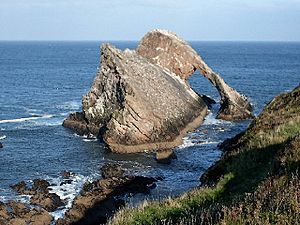 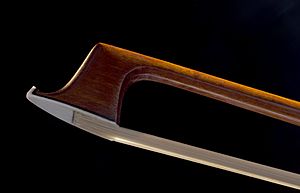 Bow Fiddle Rock is a natural sea arch near Portknockie on the north-eastern coast of Scotland. It is so called because it resembles the tip of a fiddle bow.

It is composed of Quartzite, a metamorphic rock which was originally quartz sandstone. This rock is part of the Cullen Quartzite formation which is seen along the coast between Buckie and Cullen. The formation is some 2,400m thick and dates from the Neoproterozoic Era, 1,000 to 541 million years ago.

These rocks were folded when the ancient continents of Laurentia and Avalonia collided during the Caledonian orogeny. They later became exposed at the surface where sea and weather eroded the structure seen today.

All content from Kiddle encyclopedia articles (including the article images and facts) can be freely used under Attribution-ShareAlike license, unless stated otherwise. Cite this article:
Bow Fiddle Rock Facts for Kids. Kiddle Encyclopedia.