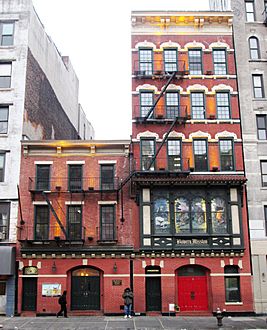 The Mission's two buildings on the Bowery in 2013

The Bowery Mission is the oldest Christian rescue mission in New York City. It is well-known for its history as a soup kitchen and men's shelter located at 227 Bowery between Rivington Street and Stanton Street in the Bowery neighborhood of Manhattan, New York City. Today, the organization provides programs and services at six campuses across the NYC metro area.

The Bowery Mission was founded in 1879 by the Reverend Albert Gleason Ruliffson and his wife. It was the third rescue mission established in the United States, and the second in New York City.

In 1895 the Mission was bought by Dr. Louis Klopsch, owner of The Christian Herald, to save it from economic distress. It became one of many domestic charities sponsored by the publication. Klopsch also bought the building it was in, which up to that time had been leased, and became the president. The Mission was formally incorporated as Bowery Mission and Young Men's Home in 1897.

One prominent board member was Sarah J. Bird, a philanthropist who was known as "the Mother of the Bowery Mission" due to her long-time service to the organization from 1881 to 1914.

In 1900, The Bowery Mission came under the supervision of John Greener Hallimond, originally from England. Hallimond introduced many innovative services, such as a home for women in Brooklyn, an employment agency and the famed breadline, which began in 1902. 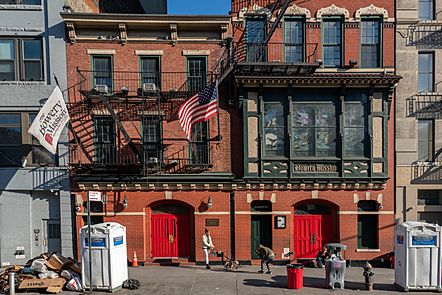 The bowery mission flag in 2020

The mission began in a small room at 14 Bowery, where it offered prayer services, and moved to 36 Bowery in 1880. In 1887 it moved to 105 Bowery until that building was destroyed by fire in 1898, at which time they moved to 55 Bowery. When that building was scheduled to be demolished to make way for the approaches to the Manhattan Bridge, the mission moved to its current location at 227 Bowery. Today, the Mission also owns the building next door at 229 Bowery.

The Mission's building at 227 Bowery was designated a New York City landmark on June 26, 2012. It was built in 1876 for James Stolts, an undertaker and manufacturer of coffins, and was designed by William Jose in the neo-Grec style. It was altered in 1908-09 for the Mission's use by Marshall L. and Henry G. Emery, who added the stained glass windows on the second floor and remodeled the interior of that floor into a chapel in the Gothic Revival style.

In 1894, with money left over from a food drive, Klopsch created a "Fresh Air Home" in Nyack, New York to serve children of recent immigrants. It remained at Nyack-on-the-Hudson for 69 years before it moved to the Pocono Mountains in Pennsylvania in 1963.

All content from Kiddle encyclopedia articles (including the article images and facts) can be freely used under Attribution-ShareAlike license, unless stated otherwise. Cite this article:
Bowery Mission Facts for Kids. Kiddle Encyclopedia.