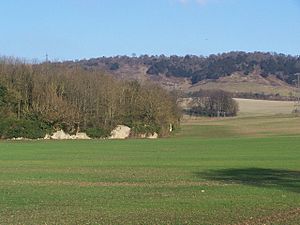 Boxley Abbey in Boxley, Kent, England was a Cistercian monastery founded c.1146 by William of Ypres, leader of King Stephen's Flemish mercenaries, and colonised by monks from Clairvaux Abbey in France. Some of its ruins survive, some four miles north-east of Maidstone.

In 1171, the then abbot was one of those responsible for the burial of the murdered archbishop of Canterbury, Thomas Becket. In 1193 the abbots of Boxley and Robertsbridge journeyed to the continent to search for King Richard I, finally locating him in Bavaria. During 1512-13, the abbot appealed to the crown to arrest four of the monks, accusing them of rebelliousness. 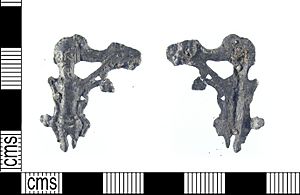 The abbey was famous, and later infamous, for a relic known as the Rood of Grace, a wooden cross, the figure upon which was supposed to miraculously move and speak. In 1538 during the Dissolution of the Monasteries one Geoffrey Chamber, a "commissioner" employed by Thomas Cromwell to oversee the closure of the institution, examined the famed relic and discovered it to be a fake, observing the levers and wires that enacted the so-called miracles. The rood was taken down and displayed in Maidstone market so as to demonstrate the fraud. Finally, it was sent to London and to the accompaniment of a mocking sermon from John Hilsey, Bishop of Rochester, it was hacked to pieces in front of St Paul's Cathedral and burnt.

There is no evidence that any miracles were ever associated with the moving image, notwithstanding the monks' practice of infiltrating hired imposters into the throng to celebrate the supposed cures. However, the presence of wires and levers in themselves does not constitute fraud; theatrical historian Leanne Groeneveld contends that this "puppetry" was presented as a theatrical show to a fully cognisant audience. Diarmaid MacCulloch, a biographer of Thomas Cromwell, notes that moveable parts, "for devotional and not fraudulant purposes", were occasionally a feature of religious statuary made during the twelfth century, the date of this figure.

A legend that an effigy of the infant Saint Rumbold could only be lifted from its plinth by the particularly righteous was exploited by the monks, who engaged or disengaged a hidden bolt under the statue, according to the size of the cash gift on offer. The supposed finger of the apostle Andrew, inlaid heavily with silver, was also on display but was pawned to a local merchant for eleven pounds when the flow of "credulous and devout" visitors ceased.

The Dissolution and beyond

The abbey appears to have been "surrendered" to the king, or dissolved, on 29 January 1537 (in the 28th year of the reign on Henry.) The site of the abbey and many of its manorial estates were granted to Sir Thomas Wyatt in 1540. After the dissolution some of the complex was transformed into a house with the remainder virtually demolished. Parts survive within the present mainly 19th-century Boxley Abbey House, and there are some fragmentary remains of the church still standing. Boxley Abbey Barn, a large 13th-century stone building which served as the abbey's Hospitium remains. It is a Grade I listed building. The precinct of the abbey is a scheduled monument. The site is private. The parish church of St Mary and All Saints was associated with the abbey.

All content from Kiddle encyclopedia articles (including the article images and facts) can be freely used under Attribution-ShareAlike license, unless stated otherwise. Cite this article:
Boxley Abbey Facts for Kids. Kiddle Encyclopedia.