Bradley Trevor Greive AM (born 22 February 1970) is an Australian author. He has written 24 books which have been translated into 27 different languages, and have been sold in 115 different countries, several of which have appeared in the New York Times bestseller list. Greive's work has won multiple awards worldwide and has sold more than 25 million copies. He lives mostly in Tasmania, Alaska and California. 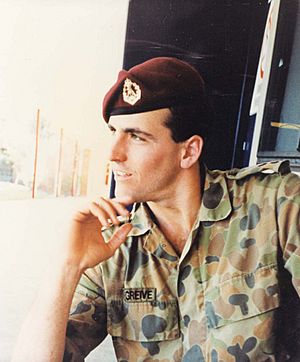 Greive served as a paratrooper until 1993.

Greive was born in Hobart, Tasmania to Dr Trevor Colin Greive and Nita Fay Greive, and spent his childhood living with his parents and sisters in numerous countries across Europe and Asia. He returned to Australia in 1979 to finish his schooling at Tweed Valley College in Murwillumbah, where he was awarded Dux in 1988.

Greive joined the Australian Army after leaving high school and underwent training at the Royal Military College Duntroon in Canberra. Whilst an undergraduate at RMC Duntroon, Greive undertook a military exchange with the Royal Thai Military Academy, during which he toured Thai/Cambodian border military installations and refugee camps. Upon graduation as a commissioned officer (Lieutenant) Greive was posted to the 3rd Battalion of the Royal Australian Regiment (Para), and assumed command of 1st Platoon, Alpha Company – a paratroop combat rifle platoon. Greive's specialist combat qualifications include: Airborne Operations, Air Mobile Operations, Survival, Mine Warfare & Anti Handling Devices (Instructor), Heavy Weapons – Direct Fire Weapons, Anti-Armour, Heavy Machine Guns (Instructor). He continued to serve in this capacity until 1993, when he left the military due to a tropical respiratory infection that led to asthma.

Greive subsequently worked across several creative fields (including media such as television, radio and published cartoons) before his debut as a successful author in 2000, which led to the inception of BTG Studios, followed by The Lost Bear Company and the uptake of several creative projects, which he continues to work on to the present.

Greive rose to prominence as an author in 2000 with the release of his hugely successful The Blue Day Book, a collection of amusing animal photos and inspirational text designed to "lift the spirits of anyone who has got the blues." Since then he has published 24 books and has won numerous awards for his work, including the ABA Book of the Year Award (2000), the APA Best Designed Children's Non-fiction Book Award (2003) and numerous #1 placings in bestseller lists across the world. Greive's books have been published on 6 continents and have sold in excess of 25 million copies to date. In late 2013, Greive purchased the English language gift-book rights to Bertrand Russell's seminal essay, 'In Praise of Idleness'.

In 1996 Greive became a creative consultant and writer for Godfrey Bigot's weekly political sketches on Channel 7's Today Tonight, and went on to pursue a similar role in 1997 with MTV Australia. In 1998, Greive collaborated with Kapow Pictures to write and direct an animated short for Nickelodeon called Agent Green, and a short film called Show & Tell which won the Comgraph Animation Gold Award, the Tellrude Film Festival Best Short Film Award, the Danish International 3D Award, and was nominated for an AFI Award for Best Short Animation.

In 2007 he wrote, produced and hosted The World According to Bradley Trevor Greive on Tasmania's community radio station Star FM .

Greive has formed a close relationship with ABC Radio and Television, appearing on numerous programs over the past decade, including Stateline, ABC National News, ABC Radio National Night Club, and an appearance on Creature Features with his pet rabbit, Biff.

On 21 April 2007, Greive read his poem "Welcome to the East Coast (After the Fire)", during the live broadcast from the ABC 'Back to St Helens' concert to acknowledge the heroic efforts of the East Coast community who rallied together during the devastating forest fires of December 2006.

Over December 2009 and January 2010, Greive presented ABC Radio National Evenings (hosted by Christopher Lawrence) with his 'E-Mail From America' – a weekly series of eclectic and humorous reports from Florida, USA. The title of Greive's program was a tongue in cheek homage to the late Alistair Cooke's Letter From America, "a weekly 15-minute radio series on BBC Radio 4, previously called the Home Service, which ran for 2,869 shows from 24 March 1946, to 20 February 2004, making it the longest-running speech radio program in history. The program was also broadcast for many years on the BBC World Service."

Shortly after retiring from his career as a paratrooper in 1993, Greive worked in several entry-level positions in the advertising, modelling and service industries which he has described as "creatively enlightening". In 1994 Greive went on to become the youngest feature cartoonist at the Sydney Morning Herald, and launched a series of cartoons known as Fate which featured in the Manly Art Gallery and Museum Newsletter. Greive continued to explore his graphical creativity in 1995 with the launch of the Bradley Trevor Greive Cartoon Series in the Sydney Morning Herald. Greive's work was later exhibited at the Museum of Contemporary Art, Sydney in 1997. In 2011 Greive launched 'The Lost Bear', a single panel cartoon series on Go Comics, the world's most popular online comic site. Go Comics currently generates over 70,000,000-page views per month and belongs to Universal Uclick, the world's largest independent syndicate.

Since 2010 Greive has twice been the Executive Creative Consultant in Residence for Walt Disney Imagineering's elite Blue Sky creative think-tank. He has also returned to WDI to lecture on 'The Nature of Creativity' on two occasions, and continues to have close professional ties with a number of key creative divisions within the world's largest media conglomerate.

In late 2013 Greive signed with the United Talent Agency, who now represent him for film, stage, radio, lectures and television work. As an author, and for all his publishing endeavours Greive continues to be represented by Al Zuckerman, the founder of Writers House, New York.

Wildlife conservation and other activities

In 2002 Greive teamed up with famed Japanese wildlife photographer, Mitsuaki Iwago, to produce a book on biodiversity entitled Priceless – The Vanishing Beauty of a Fragile Planet. Greive donated all his author royalties to the Taronga Foundation, an Australasian wildlife conservation charity. The book has inspired numerous people to take positive action in regards to wildlife conservation, including British filmmaker, Steve Piper, who went on to make an acclaimed documentary about critically endangered Scottish Wildcats.

In 2004 Greive qualified for the Russian space program by completing testing and basic training at the Yuri Gagarin Cosmonaut Training Center in Moscow, and in 2006 won the French Polynesian Ha'a'piti Rock lifting championships.

On 24 October 2013 Greive attended the official opening of the Tasmanian Devil exhibit at San Diego Zoo in his capacity as both a Tasmanian representative and also as Governor of Taronga Western Plains Zoo; the Taronga Conservation Society Australia facility that provided the Tasmanian Devils for this international conservation education partnership.

In 2014 Greive was awarded the Order of Australia for his significant service to literature and wildlife conservation.

Despite his many media appearances, Greive is known to be a very private person; a "self-described cave bear by nature, who equates publicity to "being stoned to death with toffee apples"" He currently lives on a remote farm on the East Coast of Tasmania, Australia and has never allowed media onto his property.

In 2011, Greive temporarily relocated to Costa Rica to work on a new book entitled The Obsequious Parrot.

Since 2010, Greive has been in a romantic relationship with American architect Amy Melin. They were married in June, 2015.

In 2013, Greive temporarily relocated to Alaska to research an as yet untitled book about brown bears and Tlingit culture.

All content from Kiddle encyclopedia articles (including the article images and facts) can be freely used under Attribution-ShareAlike license, unless stated otherwise. Cite this article:
Bradley Trevor Greive Facts for Kids. Kiddle Encyclopedia.