Breckenridge is a city in Stephens County, Texas, United States. The estimated population was 5,349 as of February 2021. It is the county seat of Stephens County. The mayor is Bob Sims.

Breckenridge was a stop on the since defunct Wichita Falls and Southern Railroad, one of the properties of Frank Kell and Joseph A. Kemp of Wichita Falls, Texas. The line was thereafter operated until 1969 by the Chicago, Rock Island and Pacific Railroad.

Dallas Cowboys legend Gerald M. "Jerry" Tubbs was an honor graduate student and played center at Breckenridge High School. He was part of two Texas state-championship football teams in 1951 and 1952. He played in three high-school all-star games, and was a unanimous Texas All-State selection in 1952. In 1971, Tubbs was inducted into the Texas High School Football Hall of Fame.

The town of Breckenridge originated in 1854 as Picketville, either named after the structure of its early homes or after rancher Bill Pickett, who lived in the area at the time. In 1876, Stephens County was established, and its territory included Picketville. The town was renamed "Breckenridge" after former U.S. Vice President and Confederate Army General John C. Breckinridge, though with an altered spelling.

Breckenridge was a major oil producer in the early 1920s. The population jumped from around 1000 to 5000 in under five years. Briefly, it was the home of Western legend/dentist/gambler John "Doc" Holliday. Breckenridge's boomtown era was well documented by the hundreds of photographs of pioneer photographer Basil Clemons. 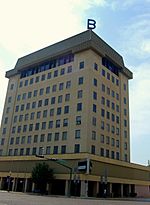 The climate in this area is characterized by hot, humid summers and generally mild to cool winters. According to the Köppen climate classification, Breckenridge has a humid subtropical climate, Cfa on climate maps.

Around 5:20 pm local time on April 9, 2008, three tornadoes, including two "sisters", were confirmed to have hit at least a portion of the town. Within the city limits, 15 citizens were reported as injured. Five buildings were destroyed, including the airport, which was a former Air Force training facility.

All content from Kiddle encyclopedia articles (including the article images and facts) can be freely used under Attribution-ShareAlike license, unless stated otherwise. Cite this article:
Breckenridge, Texas Facts for Kids. Kiddle Encyclopedia.