Breffni Park, known for sponsorship reasons as Kingspan Breffni, is a GAA stadium in Cavan, Ireland. It is the home of Cavan GAA. The ground has an overall capacity of about 25,030 with a 5,030 seated capacity. Breffni is the historic name for area of Cavan/Leitrim. Cavan is often referred to as the Breffni County. Kingspan Breffni is located on Park Lane to the south of Cavan town. Breffni Park hosted the first test in the 2006 Ladies' International Rules Series between Ireland and Australia. It also hosted the first test during the 2013 International Rules Series. 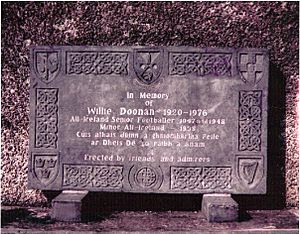 Breffni Park was opened in 1923. The opening was attended by Eoin O'Duffy who gave a speech calling on the GAA to "bring together all sections of the Irish people" to "save the youth of Ireland from the sea of moral degradation into which they were travelling".

During the COVID-19 pandemic, Breffni Park was used as a drive-through test centre.

In June 2009, the world record for the twelve-hour continuous relay race was broken by 1,868 participants.

The 2009 Cavan Camogie Development Fun Day to promote the development of camogie at underage levels was held at Breffni Park on 7 June 2009.

Breffni Park has hosted a number of qualifiers for the All-Ireland Senior Football Championship.

The stadium hosted one game involving Cavan when they progressed to round four of the qualifiers for the All-Ireland Senior Football Championship 2005. The team entered the qualifiers in the second round where they beat Donegal by a score of 1–11 to 1–10 at the ground. Breffni Park also hosted the third round qualifying game between Monaghan and Louth which Monaghan won by 1–12 to 0–14.

The round three qualifier for the All-Ireland Senior Football Championship 2007 between Derry and Laois was played at Kingspan Breffni Park. Derry won by 1–18 to 2–11 to go through to the quarter finals.

In the 2011 Football Championship it hosted 25 June round 1 qualifier between Louth and Meath, and Cavan versus Longford.

Breffni Park was chosen to host the 2006 Division Two Final of the Allianz National League between Donegal and Louth. There was controversy when Donegal's manager Brian McIver was upset as he thought the game should have been played at Croke Park in Dublin. McIver said: "It defies logic and I think the sponsors might have something to say about it as well. It's very strange that the finals can suddenly be moved from Croke Park. [...] The National League is the second biggest competition in the GAA and the finals should be staged at Croke Park". The GAA claimed it was due to "the geographic considerations in respect of the four Division One semi-finalists". Donegal's semi-final defeat of Westmeath had also taken place at Breffni Park.

All content from Kiddle encyclopedia articles (including the article images and facts) can be freely used under Attribution-ShareAlike license, unless stated otherwise. Cite this article:
Breffni Park Facts for Kids. Kiddle Encyclopedia.