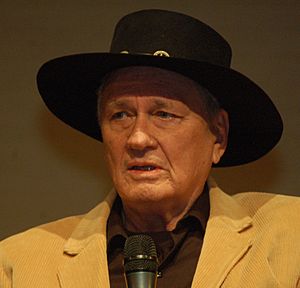 Halsey was born in Santa Ana, California. He is a great-nephew of William Halsey Jr., a U.S. Navy admirable. He has been married four times, including to Italian actress Luciana Paluzzi. He has three children.

All content from Kiddle encyclopedia articles (including the article images and facts) can be freely used under Attribution-ShareAlike license, unless stated otherwise. Cite this article:
Brett Halsey Facts for Kids. Kiddle Encyclopedia.