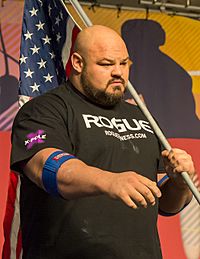 Brian Shaw (born February 26, 1982) is an American professional strongman. He is winner of the 2011, 2013, 2015, and 2016 competitions. In 2011, he became the first man to have won the Arnold Strongman Classic and the World's Strongest Man contest in the same calendar year. He achieved this again in 2015. Shaw also uploads videos on his YouTube channel SHAWSTRENGTH.

Shaw was born in Fort Lupton, Colorado. He is married and has two children.

All content from Kiddle encyclopedia articles (including the article images and facts) can be freely used under Attribution-ShareAlike license, unless stated otherwise. Cite this article:
Brian Shaw (strongman) Facts for Kids. Kiddle Encyclopedia.