Brice Lauriche Samba (born 25 April 1994) is a Congolese professional footballer who plays as a goalkeeper for Nottingham Forest. 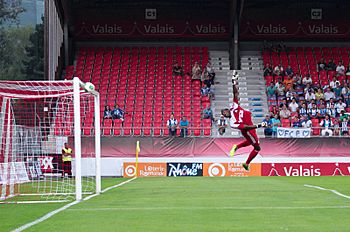 Samba joined Le Havre in 2006, working his way through their youth team's before appearing in the first-team in 2011.

On 4 January 2013, Samba joined Marseille from Le Havre AC, signing a four-and-a-half year contract. He made his professional debut for Marseille on 5 January 2014 in a Coupe de France game against Stade de Reims keeping a clean sheet in a 2–0 home win. On 9 July 2015, Samba joined AS Nancy on a season-long loan.

Samba joined Caen on a four-year deal from Marseille on 30 June 2017.

On 7 August 2019, Samba joined EFL Championship side Nottingham Forest on a four-year deal for an undisclosed fee. He was initially brought in as a backup for on loan goalkeeper Arijanet Muric, but earned his place as Forest's number one after Muric made a number of costly mistakes.

His impressive performances led him being named the Championship Fans' Player of the Month for November 2019.

All content from Kiddle encyclopedia articles (including the article images and facts) can be freely used under Attribution-ShareAlike license, unless stated otherwise. Cite this article:
Brice Samba Facts for Kids. Kiddle Encyclopedia.