Bright Hill MRT station is a fully underground mass rapid transit station with four station entrances and exits. The station will serve the industrial estate of Sin Ming and is located near landmarks such as Peirce Secondary School and Ai Tong School. It is also located close to the Kong Meng San Phor Kark See Monastery. The monastery is Singapore's largest Mahayana Buddhist temple. The station derived its name from the temple. 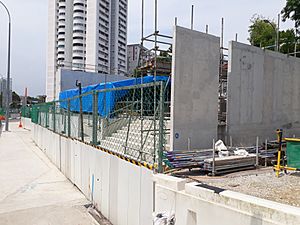 A future entrance to the station under construction.

On 29 August 2012, it was announced that a Mass Rapid Transit station would be built in the Sin Ming as part of the new Thomson MRT line. This underground station was given the working name "Sin Ming". The station was later renamed to "Bright Hill MRT Station" on 27 August 2014 after a public voting exercise to determine the names of Thomson Line stations. This name is the English translation of the location name "Kong Meng San" (光明山), where the Monastery is located.

Bright Hill MRT station was merged into the Thomson-East Coast MRT Line when the Land Transport Authority announced that the Eastern Region MRT Line and Thomson MRT line would be operating as a single line.

This station will become an interchange station with the Cross Island Line when the line opens in 2029.

All content from Kiddle encyclopedia articles (including the article images and facts) can be freely used under Attribution-ShareAlike license, unless stated otherwise. Cite this article:
Bright Hill MRT station Facts for Kids. Kiddle Encyclopedia.