Brislington West is a council ward of the city of Bristol, England. It covers the western part of Brislington, together with Arnos Vale and Kensington Park.

Brislington is one of the largest suburbs of Bristol, and it is split into two sections for the purposes of local government; Brislington West and Brislington East. Notable places in the western section include Oasis Academy Brislington and the HTV studios. 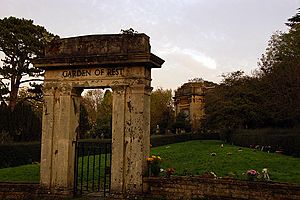 Arno's Vale (also written Arnos Vale) is an area near the centre of the city. It includes the historic Arno's Vale Cemetery, which occupies 45 acres (180,000 m2) in the neighbouring Knowle ward. The cemetery was closed in 1998, but it has been kept open by volunteers since. Arno's Vale Cemetery is part of the old Arno's Court Estate. It is one of only four estates in Bristol that still have the original estate house standing (now known as Arno's Manor Hotel). The remaining estate land includes the cemetery, the hotel and Arno's Court Park. The park, which has views across Bristol, connects two geographically separate areas in Bristol (Knowle & Brislington), separated by a very steep hill within the park.

What remains of Arno's Estate, which includes the Parkside Hotel, Brislington, Arno's Court Triumphal Arch and Black Castle Public House is situated beside the A4 road two miles (3 km) south east of Bristol city centre. The main roads to Bath and Wells run through the area.

Kensington Park is a small suburb. It is centred on the stretch of Bath Road which runs from Arno's Vale to Brislington village, and includes Kensington Park Road, Kings and Hampstead Roads, the southern end of Winchester and Wick Roads, Eagle Road and the northern parts of Water Lane. In the west it is bounded by Upper Knowle and to the north, east and south by Brislington.

In terms of both its architectural style and demographics, it is similar to other areas of south Bristol such as Southville and Upper Knowle, although considerably smaller than either. Houses in the district are largely Victorian and early 20th century dwellings, and include many which are large and well-preserved. It is largely inhabited by urban professionals.

On Bath Road, opposite the entrance to Kensington Park Road is a small memorial cross dedicated to people who lost their lives in the First World War. 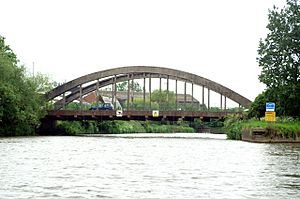 Bridge over the river Avon

The northern boundary of the area including St Anne's park is marked by the River Avon, and the suburb crossed by the Great Western Railway, and some sidings, just east of Temple Meads Station. The railway passes through a tunnel which was built by Isambard Kingdom Brunel in 1840 which is a listed building.

All content from Kiddle encyclopedia articles (including the article images and facts) can be freely used under Attribution-ShareAlike license, unless stated otherwise. Cite this article:
Brislington West (ward) Facts for Kids. Kiddle Encyclopedia.