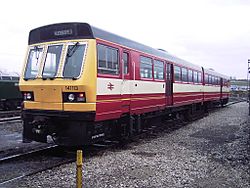 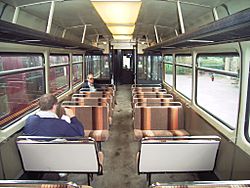 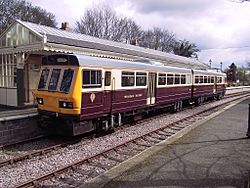 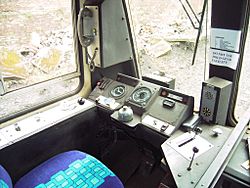 The British Rail Class 141 was the first production model of the Pacer diesel multiple units. They were created because then British Rail had a large shortage of trains so rather than spending lots of money on expensive proper trains, they invented the Pacer. British Leyland at the time had a surplus in the production of bus bodies so the idea was to weld the bus body from an old bus on to a freight waggon chassis. The result of this was that pacers have notoriously poor suspension and are noisier around corners due to flanging (the squeaky noise that you'll sometimes hear when travelling by train). This makes them non-ideal passenger trains so they are now being replaced (or have been replaced in the case of the class 141) by new trains.

All content from Kiddle encyclopedia articles (including the article images and facts) can be freely used under Attribution-ShareAlike license, unless stated otherwise. Cite this article:
British Rail Class 141 Facts for Kids. Kiddle Encyclopedia.