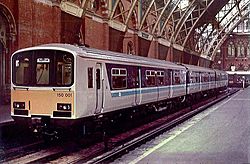 During a demonstration run in the summer of 1985 unit 150001 stands in Platform 7 at London's St Pancras station. 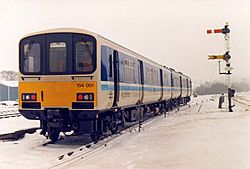 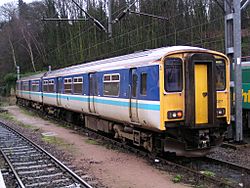 Class 150/2, no. 150217 Oliver Cromwell stabled at Ipswich on 31st January 2004. This was the last Anglia unit to carry original Provincial livery, before it was repainted into Anglia Railways turquoise livery in March 2004.

The British Rail Class 150 "Sprinter" diesel multiple units (DMUs) were built by BREL from 1984-87. A total of 137 units were built in three main subclasses, replacing many of the earlier first-generation "Heritage" DMUs.

All content from Kiddle encyclopedia articles (including the article images and facts) can be freely used under Attribution-ShareAlike license, unless stated otherwise. Cite this article:
British Rail Class 150 Facts for Kids. Kiddle Encyclopedia.