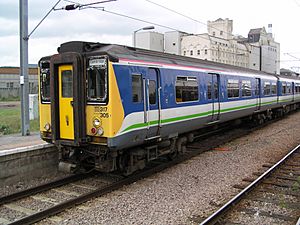 The British Rail Class 317 electric multiple units were built by BREL at York Works in two batches, from 1981-82 and 1985-87. They were the first of several classes of British Rail EMU to be based on the all-steel Mark 3 bodyshell, departing from the "PEP"-aluminium design which had spawned the earlier Class 313 to Class 315. The Mark 3 bodyshell was also the basis of Class 318, Class 455, and the diesel "sprinters" pioneered by the Class 150.

All content from Kiddle encyclopedia articles (including the article images and facts) can be freely used under Attribution-ShareAlike license, unless stated otherwise. Cite this article:
British Rail Class 317 Facts for Kids. Kiddle Encyclopedia.