The broad-billed hummingbird (Cynanthus latirostris) is a small-sized hummingbird that resides in Mexico and the southwestern United States. The bird displays sexual dimorphism, and the juveniles resemble the female adult more than the male adult. The broad-billed hummingbird is a bright coloured bird with a broad and bright red bill. The bird is also known for its other common names – the Colibrí Pico Ancho in Spanish and Colibri circé in French. It is a diurnal bird.

There are around 360 described species of hummingbirds that can be further categorized into 9 different clades. The Cynanthus genus falls under the emerald clade of hummingbirds. The emerald clade formed between 10 and 15 million years ago and has the largest diversity of species. The broad-billed hummingbird was formally described in 1827 by William Swainson based on specimens collected by William Bullock in México. Swainson coined the binomial name Cynanthus latirostris. Swainson specified the type locality as "Table land ?" where he included a question mark. This species probably does not occur there and in 1939 the American ornithologist Robert Moore designated the type locality as the Valley of Mexico near Mexico City. The species name combines the Latin latus meaning "broad" with -rostris meaning "-billed".

There are four recognised subspecies of the broad-billed hummingbird. These subspecies are:

There are doubts surrounding the subspecies status of C. l. doubledayi and C. l. lawrencei. A study by McGuire et al. (2014) analyzed the mtDNA and nDNA of C. l. doubledayi and concluded that it should be treated as its own species instead. C. l. doubledayi was found to relate more to Canivet's Emerald (Chlorostilbon canivetii) than the Broad-billed hummingbird. The same study also showed that the genus is paraphyletic and concluded that C. latirostris is closer related to Canivet's Emerald (Chlorostilbon canivetii) than another other species in the genus, the Dusky Hummingbird (Cynanthus sordidus).

The broad-billed hummingbird is a small-sized hummingbird at about 8–10 cm (3.1–3.9 in) long. It weighs only 3–4 grams, with the male weighing slightly more than the female. The wingspan of the hummingbird is about 13 cm (5.1 in). It has a long, bright reddish coloured bill that has a black tip. The birds are metallic green dorsally with more dull colouring on the crown and forehead. The hummingbird is sexually dimorphic, with the adults appearance varying significantly.

The male is dark green with white undertail-coverts and a blue throat. The adult males tail is blackish-blue and broad. The flight feathers are brownish-gray. The adult female has a pale belly and has a white eyestripe behind her eye. Her tail feathers are white-tipped. The bill of the male is shorter but brighter red. As for size, both the juvenile and adult males have larger wings and tails than the female.

The hatchings have a brown body and orange downy feathers and an orange bill. Not much is known about hatchlings, but in captivity, the juvenile birds have been seen to have adult plumage within 6–8 months.

The C. latirostris chatter is done by both the male and the female. Like the note of a Ruby-crowned Kinglet (Regulus calendula) the chatter sounds like a rapid chi-dit. This noise can be done while perching or in flight. The males display call is a whining zing - but little is known about its song.

In Mexico, specimens have been collected at nearly every elevation above sea level, even from 1494 to 3048 meters high. Along the Pacific coast, the broad-billed hummingbird is known to be a common resident of arid thorn forests, tropical deciduous forests and riparian gallery forests.

During breeding season, the broad-billed hummingbird is common in desert canyons and low mountain oak woodlands. It's found in the Southwest United States through to central Mexico. It has been noted breeding in southeast Arizona, southwest New Mexico and rarely in southwest Texas. There have also been rare sightings across the continent, including in Arkansas. In the state of Sonora, Mexico, it is the most common hummingbird.

The breeding populations of C. l. latirostris in the United States, Sonora and Nuevo León are all migratory. Not enough information is known about the migration but it's believed that the birds fly deeper south into Mexico, into Guerrero and Baja California Sur. Most populations in Mexico are resident, unless they reside in the extreme north. The Northern populations migrate south in the beginning of November, and return in early March. There have been rare sightings in the fall and winter months in Southern California, Texas and even rarely in Oregon, Idaho, Colorado and the East Coast. An abundance map of broad-bill hummingbirds has been produced on eBird. 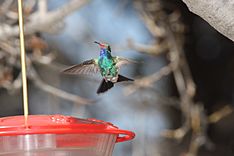 To feed on nectar, the hummingbird will extend its bill and long tongue into the flower to access the nectar while hovering. This differs from their behaviour at feeders, where oftentimes they will perch. To feed on insects, the bird species can catch them midair or hover and pluck them from a plant.

Not much is known on the metabolism, drinking and food selection process of this species. 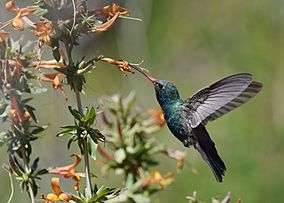 C. latirostris feeding on nectar from a flower in Arizona

In the United States, the Broad-billed hummingbird is known to eat from the following flowering species:

In southern Mexico, the Broad-billed hummingbird is known to eat from the following flower species:

In Nayarit and Jalisco, Mexico, the broad-billed hummingbird is known to occur in the same range as the Cinnamon hummingbird (Amazilia rutila). This leads to food competition and therefore when co-occurring, the C. latirostris will feed from flowers with low-nectar availability. The broad-billed hummingbird will feed from high-nectar available flowers such as the sharpleaf jacaranda (Jacaranda acutifolia), sleeping hibiscus (Malvaviscus arboreus), and mistletoe (Psittacanthus longipennis). When in competition with the A. rutila, the C. latirostris will feed from Calopogonium parvum, royal poinciana (Delonix regia), velvet-seed (Hamelia versicolor), hibiscus (Hibiscus sp.), and coralblow (Russelia tenuis).

In central Mexico, the C. latirostris feeds on two cacti (Pachycereus weberi and Pilosocereus chrysacanthus.) After feeding on these species, the hummingbirds studied were found to have pollen grains on them. However it was deemed that they have no role in the pollination of these plants.

There is little available information regarding the broad-billed hummingbird eating insects. However, one study showed that even when there is an abundance of insects, the hummingbirds prefer to feed from flowers if available. In Guadalupe Canyon, Mexico, the hummingbirds were only seen eating flying Diptera and Ephemeroptera.

In the United States, there are usually 2 brood attempts per year, in mid-April to mid-to-late June and then again in July to mid-August. These dates overlap with the peak nectar availability in the broad-bill hummingbirds' habitats. In Arizona, pairs breed in semi-open habitats at 914 to 1524 meters in elevation. In southern Mexico, the species breeds over a long period of time. The bird's sex organs have been shown to be able to breed from January to August. In Sonora and western Mexico, breeding starts mid-January, peaking in Mid March and ending in August.

The broad-billed hummingbird typically creates a nest within 2 meters of the ground. In Guadalupe Canyon, most nests were found to be at an average height of 1.1 meter above the ground. Although the height from the ground matters to the mothers, the nesting habitats have been found at many elevations. One study found 4 nests between 14 meters, in Sinaloa, to 442 meters, in Sonora. Nest site selection is thought to be less specific in individuals living towards the southern part of the range. The nests themselves are constructed only by the females. The female will weave nesting material (bark, grasses and dried leaves) into a nest and shape it with her body. The nest is about 2.5 cm tall, with an interior diameter of 1.9 cm. The interior is lined with materials such as white plant down, plant stems, leaves, plant blooms and even lichen. Once ready, the female broad-billed hummingbird will lay 2 eggs into her nest. The eggs of C. latirostris are smooth and white. On average, the eggs measure 12 by 8 millimeters. Although uncertain, it's believed that the female incubates the eggs for more than 2 weeks. After hatching, in Guadalupe Canyon the females spent about 60% of each hour at her nest. The largest causes of nest mortality are due to predation on eggs and nestlings, abandonment of nest before egg and failure for eggs to hatch.

There is little known information available regarding incubation, hatching, growth and fledgling of the broad-billed hummingbird.

All content from Kiddle encyclopedia articles (including the article images and facts) can be freely used under Attribution-ShareAlike license, unless stated otherwise. Cite this article:
Broad-billed hummingbird Facts for Kids. Kiddle Encyclopedia.