The settlement of Broad Bay is located on the Otago Harbour coast of Otago Peninsula, in the South Island of New Zealand. It is administered as part of the city of Dunedin, and is technically a suburb of that city, though its isolation and semi-rural nature make it appear as a settlement in its own right.

Broad Bay is 13 kilometres (8.1 mi) to the east of the city centre, but due to the shape of the peninsula's coastline, the heart of the city cannot be seen from Broad Bay. A large bluff, Grassy Point, lies between Broad Bay and the harbourside settlements of Company Bay and Macandrew Bay to the west. The bluff is skirted by Portobello Road, the road which winds around the southeastern shore of the harbour between inner Dunedin and Portobello, 2 kilometres (1.2 mi) to the northeast of Broad Bay. The Camp Road walking track connects Broad Bay with Larnach Castle, close to the ridge of the peninsula. 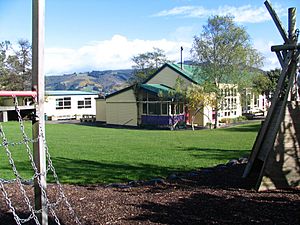 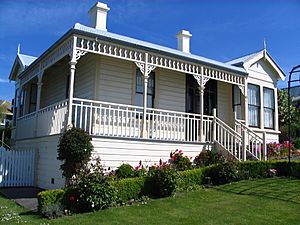 Broad Bay is situated on the shore of an aptly named wide bay (Broad Bay) and a smaller bay to the north east (Turnbulls Bay); between these lie a short peninsula (on which is sited the settlement's small historic cemetery), which terminates in the steep, finger-like headland of Yellowhead. The distinctive peak of Harbour Cone forms a backdrop to the settlement as seen from the harbour.

The settlement has one school, Broad Bay School, a decile 9 full primary school, which had a roll of 43 pupils in 2009, decreasing to 33 pupils by 2018. It is also home to the heritage-listed Fletcher House, constructed in 1909 and restored in 1992, the first house by Fletcher Construction founder Sir James Fletcher.

Like several settlements on the peninsula - including Portobello and Macandrew Bay, which lies 3 kilometres (1.9 mi) to the southwest - Broad Bay is a commuter settlement and a haven for alternative lifestylers. These settlements have a strong arts community, with many of their residents connected in some way with the visual or performing arts.

All content from Kiddle encyclopedia articles (including the article images and facts) can be freely used under Attribution-ShareAlike license, unless stated otherwise. Cite this article:
Broad Bay, New Zealand Facts for Kids. Kiddle Encyclopedia.