Broadhalfpenny Down facts for kids

Broadhalfpenny Down (pronounced /ˌbrɔ:dˈheɪpniː/; brawd-HAYP-nee) is a historic cricket ground in Hambledon, Hampshire. It is known as the "Cradle of Cricket" because it was the home venue in the 18th century of the Hambledon Club, but cricket predated the club and ground by at least two centuries. The club is in the parish of Hambledon close to the neighbouring parish of Clanfield. The club took the name of the neighbouring rural village of Hambledon, about 2.7 miles away by road.

The ground lies on a ridge connecting Broadhalfpenny Down itself with higher ground to the north at Wether Down and Salt Hill. The ridge and the down to the south are crossed by the Monarch's Way long distance footpath before it descends towards Horndean.

The cricket ground was the home venue for matches organised by the Hambledon Club from 1753 to 1781 which generally involved a Hampshire county team. It was used for other sports including horse racing and hare coursing. Immediately next to the ground is the Bat & Ball Inn, known as the "cradle of cricket" whose landlord for ten years from 1762 to 1772 was Hambledon captain Richard Nyren. Nyren was succeeded by his Hambledon colleague William Barber, who ran the pub from 1772 to 1784.

The name "Broadhalfpenny" is properly pronounced "broad ha'penny" a contraction following the usual pronunciation of the word for the halfpenny coin. Places that had obtained a charter from the King to hold markets or establish fairs were issued with Letters Patent stamped with "Broad-Halfpenny". Hambledon in the eighteenth century was a large parish of over 9,000 acres containing small hamlets and detached farms in addition to the main village. Much of the agricultural land had been enclosed in small farms but there remained extensive commons, including Broadhalfpenny, on which grazing rights existed. 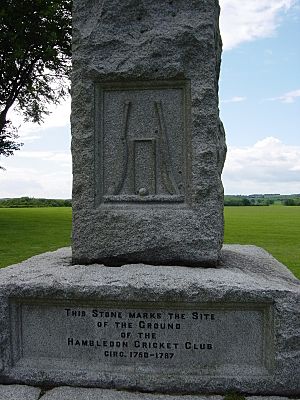 As an important match venue, the earliest known use of Broadhalfpenny Down was in August 1753 for a match between a Hambledon team and one from Surrey. Three years later, the Hambledon team was able to challenge Dartford, then one of the strongest teams in England, in a series of three matches. On Wednesday, 18 August, one of these matches was played at Broadhalfpenny Down. The source for this is an advertisement placed in the Reading Mercury newspaper by the Reverend Richard Keats of Chalton for information about his dog, a spaniel called Rover, whom he lost at the match. Reverend Keats was the father of Admiral Sir Richard Goodwin Keats who is renowned for his actions at the Battle of Algeciras Bay in July 1801. Chalton is three and a half miles east of Broadhalfpenny Down, beyond Clanfield.

Match reports were scarce in the 1750s but were becoming more common in the 1760s and it is known that Hampshire defeated Kent at Broadhalfpenny in 1768, their outstanding batsman John Small scoring more than 140 runs in the match. Scores were higher then than in earlier times and matches were tending to go into a second day. In 1770, a Sussex lawyer called John Baker left an account in his diary of a match between Hambledon and the Surrey club Coulsdon which lasted two days. Baker came from Chichester, a journey of twenty miles taking four hours on horseback. He wrote how he went to Petersfield for overnight accommodation. Baker wrote about the very large crowds which gathered at these matches and the good business done by vendors on site.

The 1772 season is notable in English cricket history because it is from then that surviving scorecards are common and three exist of 1772 matches organised by the Hambledon Club which commence a continuous statistical record. Those three matches were all between a Hampshire XI and an England XI, the first played at Broadhalfpenny on 24 and 25 June. The two leading online archives begin their first-class coverage with this match which is numbered "first-class no. 1" by ESPNcricinfo and "f1" by CricketArchive.

Broadhalfpenny Down Pavilion in Summer 2019

On 13 July 1775, Small scored 136 not out and Nyren 98 for Hampshire against Surrey at Broadhalfpenny and Small's innings is the earliest known century in first-class cricket. Despite being ordained, a Steward of the Hambledon Club and a member of the Laws of Cricket committee, the Reverend Charles Powlett was not above gambling on the outcome of matches or of betting against his own team. At one point in the match against Surrey, the situation was such that a Surrey victory seemed certain. Powlett and his associate Philip Dehaney, another Hambledon member, decided to bet heavily on Surrey to win. Then Small was joined at the wicket by his captain Nyren and the two put on a massive century partnership which turned the game around, for Surrey collapsed and Hampshire won a famous victory. When Nyren was out, he was confronted by Powlett and Dehaney who complained that he and Small had cost them their money. Nyren, disgusted with them, retorted: "Another time, don't bet your money against such men as we are." 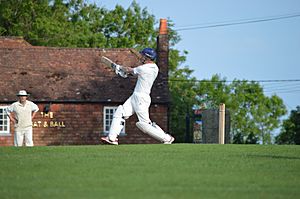 Batsman hits out in front of the Bat & Ball public house

Broadhalfpenny Down continued in regular use by Hambledon/Hampshire teams until 1781. At the end of that season, the Hambledon Club moved to Windmill Down, which is closer to the village. According to John Nyren, Windmill was "one of the finest places for playing on I ever saw". A key difference was that Windmill was under the club's control as they rented it from a farmer at ten guineas a year, whereas Broadhalfpenny was common land in use as sheep pasture, for fairs and other gatherings. It could be said that Broadhalfpenny belonged to the community and Windmill to the club, whose members may not have been happy about the "raucous, boisterous crowds that gathered (on the Down)". The move was done at the behest of the Duke of Dorset, chief among club members, and David Underdown saw it as the first step in a process which removed professional cricket from a truly rural setting and ultimately concentrated it in an urban environment, for it was Dorset's successors George Finch, 9th Earl of Winchilsea and Colonel Charles Lennox who were the key players in the establishment of the White Conduit Club in Islington and subsequently Marylebone Cricket Club at Lord's. 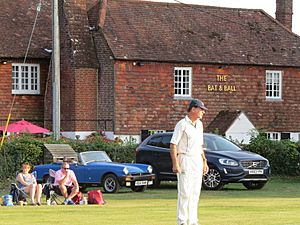 Fielder in front of Bat and Ball public house

The ground fell into disuse through most of the nineteenth century and was converted to agriculture. Attempts were made to restore the ground with the result that a Hambledon v England XI fixture in 1908 appears in the generally accepted list of first-class fixtures. This was intended as a commemorative match and featured famous players C. B. Fry and Phil Mead. Hampshire cricketer Edward Whalley-Tooker, who played in the 1908 match, was a descendant of a member of the original Hambledon Club. Following the match in 1908 the ground was reclaimed for farming. Whalley-Tooker set about the task of securing its permanent use for cricket and in 1925 it was restored to host cricket matches. The possession of the land was given to Winchester College, with the college and Hambledon playing the first match there since its restoration. Whalley-Tooker led the Hambledon side to victory.

In 2000, David Underdown visited the ground while researching his history Start of Play. He wrote that "across the road from the famous Bat and Ball pub [was] a clunky monument and a green field with a cricket pavilion, sightscreens, and a square that bore the scars of recent matches." A notice by the pavilion announced that it was the home ground of the Broadhalfpenny Buccaneers.

In this latter assertion Mr Underdown is slightly mistaken in that the club he refers to is the Broadhalfpenny Brigands Cricket Club (an understandable error in the circumstances!), formed in 1959 by a group of officers in the Royal Navy serving at nearby HMS Mercury (now closed). This club has used Broadhalfpenny Down as its home ground continuously since then. The history of Broadhalfpenny Down in the 20th century is covered in Ashley Mote's book "The Glory Days of Cricket", which explores the full history of the ground – effectively up to the present day (apart from the addition of a new pavilion in 1999 nothing substantial has changed since the first publication of Mr Mote's book in 1997).

All content from Kiddle encyclopedia articles (including the article images and facts) can be freely used under Attribution-ShareAlike license, unless stated otherwise. Cite this article:
Broadhalfpenny Down Facts for Kids. Kiddle Encyclopedia.