Kids Encyclopedia Facts
This page is about the nature reserve near Preston, Lancashire. For the village in West Yorkshire, see Brockholes. For the visitor centre in the Lake District, see Brockhole. 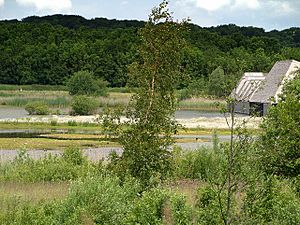 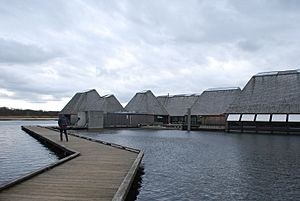 Brockholes is a nature reserve near Preston, Lancashire, England, just off Junction 31 of the M6 motorway. It is owned by the Wildlife Trust for Lancashire, Manchester and North Merseyside. Situated in the flood-plain of the river Ribble, it has the UK's first floating visitor village.

Brockholes was previously a major quarry extraction site. The land was bought by the Trust in January 2007, and the reserve opened to the public at Easter 2011. It has been regenerated as a mosaic of key habitats such as pools, reedbeds and woodland. The reserve is aimed less at dedicated bird-watchers and nature lovers than the general public of the big cities. The riverbank is covered in steaming ferns and rampant Himalayan balsam.

Brockholes offers a wide range of events throughout the year and over 250 acres of trails and hides. It has already seen record numbers of breeding wading birds along with visitors such as osprey, otter and bittern.

In July 2007 an architectural design competition managed by RIBA Competitions invited architects and architect-led multidisciplinary design teams to design the new visitor facilities for the Brockholes Wetland and Woodland Nature Reserve. A design by Adam Khan Architects, working with Price & Myers, was selected by the wildlife trust and its partners. Work commenced in 2009.

The resulting Brockholes Visitor Village is the first floating visitor centre in the UK. It houses shops, an exhibition area, an activity room for schools and community groups, a restaurant and a conference centre. It has won national recognition, receiving:

All content from Kiddle encyclopedia articles (including the article images and facts) can be freely used under Attribution-ShareAlike license, unless stated otherwise. Cite this article:
Brockholes (nature reserve) Facts for Kids. Kiddle Encyclopedia.