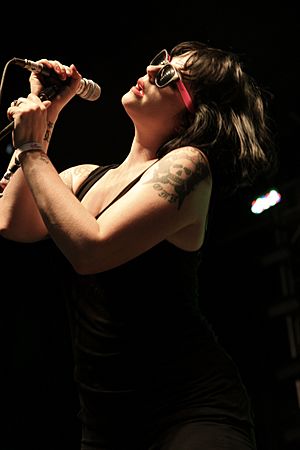 Brody Dalle (born Bree Joanna Alice Robinson on January 1, 1979) is an Australian singer and guitarist from Melbourne. She started The Distillers in 1998. Her first solo album was released on April 28, 2014.

Dalle was married to Tim Armstrong from 1997 until they divorced in 2003. She married Josh Homme in 2007. She lives with him in California.

All content from Kiddle encyclopedia articles (including the article images and facts) can be freely used under Attribution-ShareAlike license, unless stated otherwise. Cite this article:
Brody Dalle Facts for Kids. Kiddle Encyclopedia.