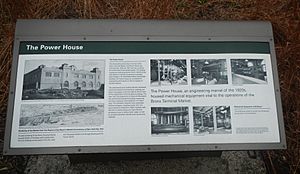 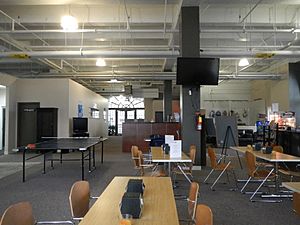 Interior of the Power House

The Bronx Children's Museum is a children's museum founded in 2005 and located at Mill Pond Park in the South Bronx, New York City. Since 2011, the museum has provided services out of its Museum On The Go! bus, also known as the "purple bus". The museum reaches about 10,000 people per year through the purple bus. Upon completion, its primary exhibition space will be located on the second floor of the Power House building in Mill Pond Park.

Among the museum's supporters are Supreme Court Justice Sonia Sotomayor and former Sesame Street star Sonia Manzano, both regular participants of the museum's "Dream Big" summer program. Manzano has also written a children's book for the museum: The Lowdown on the High Bridge about the nearby High Bridge, which straddles the East River, and provided water to Manhattan from the old Croton Aqueduct. Other celebrities associated with the museum include Kerry Washington, and Chazz Palminteri, both honorees at the museum's annual galas, and Sunny Hostin, who serves on the museum's board of directors.

The groundbreaking ceremony for the exhibition space was held on July 12, 2017. The permanent building is expected to open in 2020.

All content from Kiddle encyclopedia articles (including the article images and facts) can be freely used under Attribution-ShareAlike license, unless stated otherwise. Cite this article:
Bronx Children's Museum Facts for Kids. Kiddle Encyclopedia.