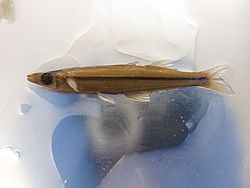 The brook silverside breeds in the summer from late May to mid-August. Their life span is only one year. During the first year, they have rapid growth, growing up to one millimeter per day. Brook silversides quickly reach a maximum size of approximately eight centimeters. They reach sexual maturity by the first summer in order to reproduce. Some studies report that brook silversides reproduce by internal fertilization, although this has not been entirely confirmed. When the eggs are produced, they have an attached filament, which allows for the eggs to be deposited on logs, plants and rocks. Temperature does not affect the sex of fish. After the eggs hatch, they immediately swim away from the shore into deeper water, but still stay just under the surface. They congregate in large schools. The brook silverside migrates throughout its life cycle. No human-induced changes are reported as affecting the life history. Human-induced changes are reported as more strongly affecting populations rather than behaviors.

Human intervention through species introduction, habitat alteration, pollution, and construction are causing the decline of the brook silverside and other freshwater fishes. Freshwater fishes account for the majority of extinctions in ray-finned fishes. To stabilize and increase populations, no more dams or waterways should be built. Additionally, pollution must be stopped. Agricultural runoff creates turbid waters, which the brook silverside cannot thrive in. Stream sampling occurs through organizations such as USFWS and TVA (locally). This allows for populations to be monitored and stream chemistry to be controlled. Over-fishing and hybridization aren't causing brook silverside populations to decline. Invasive species and habitat destruction have the greatest impact on population decline. Areas are being reserved for the preservation of endemic fish, but more must still be done.

All content from Kiddle encyclopedia articles (including the article images and facts) can be freely used under Attribution-ShareAlike license, unless stated otherwise. Cite this article:
Brook silverside Facts for Kids. Kiddle Encyclopedia.