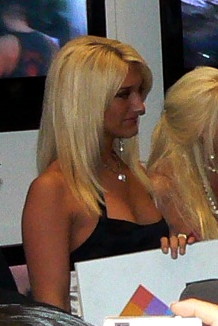 Brooke Hogan (born May 5, 1988 in Tampa, Florida) is an American singer, actress and model who currently has her own show on VH1 and MuchMore called Brooke Knows Best it is a spin-off of the show her parents were on called Hogan Knows Best. Her father is semi-retired professional wrestler Hulk Hogan. She released her debut album in 2006 entitled Undiscovered.

All content from Kiddle encyclopedia articles (including the article images and facts) can be freely used under Attribution-ShareAlike license, unless stated otherwise. Cite this article:
Brooke Hogan Facts for Kids. Kiddle Encyclopedia.