Construction commenced in April 2008 and was completed in 2012. The project is estimated to have cost around A$500 million. Other tenants include PwC, Allianz, Barrick Gold, Navitas and Servcorp.

Developers Brookfield lodged a development application for the second stage of Brookfield Place in July 2011, for a 30,000m² 16-storey office tower to be situated to the south of the main tower fronting Mounts Bay Road. Tower 2 was completed in 2015, with major tenants including Multiplex, Westpac, Wesfarmers, Ashurst LLP, Corrs Chambers Westgarth and Deloitte.

Retail tenants in the Brookfield Place complex include Montblanc and Daniel Hechter.

Brookfield Place Tower is the tallest side core commercial building in the southern hemisphere. Designed by Hassell and Fitzpatrick + Partners, it included the restoration of the surrounding historic Newspaper House Group of Buildings, comprising four heritage-listed buildings, constructed between 1910 and 1932.

The offset core protects the enclosed space by buffering the façade against the adverse northern sun and the associated solar heat gain. Externally, the expressive structural east and west exoskeletons create the distinctive tower aesthetic. The vertical expression of the tower structure accentuates the height of the building, which terminates in a tapered structural roof crown. 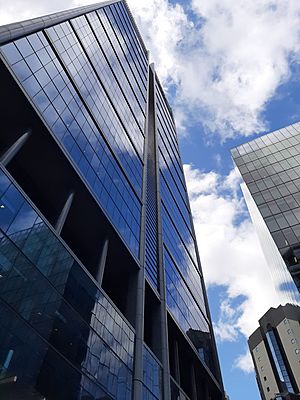 All content from Kiddle encyclopedia articles (including the article images and facts) can be freely used under Attribution-ShareAlike license, unless stated otherwise. Cite this article:
Brookfield Place (Perth) Facts for Kids. Kiddle Encyclopedia.