Brooklands is the northernmost suburb of Christchurch, New Zealand. The settlement was built on former swamp land adjacent to Brooklands Lagoon, which forms part of the Waimakariri River mouth. The land damage sustained in the 2010 and 2011 Christchurch earthquakes and subsequent Red Zone classification resulted in the buyout and demolition of nearly all properties in Brooklands, effectively wiping the suburb off the map. 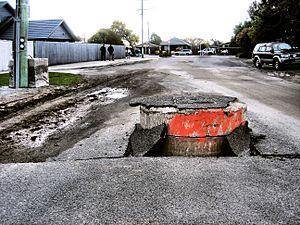 Damage in Brooklands where buoyancy caused by soil liquefaction pushed up an underground storm drain.

In the 1960s, Brooklands was a "ramshackle settlement of fibrolite houses", and well-built dwellings were "almost a talking point". Fifty years on, houses were much more substantial.

The suburb was badly affected by the 2010 Canterbury earthquake and the February 2011 Christchurch earthquake, resulting in land subsidence and liquefaction. As part of the ongoing earthquake recovery, the government announced on 17 November 2011 that the vast majority of Brooklands has been zoned red, meaning that those residential properties that have insurance would receive an offer for a government buyout of house and land. The land is deemed uneconomic to repair whilst houses are on it and will thus be bought. Some of the properties now condemned were built in 2011, and at least one house got its building consent from Christchurch City Council only after the February 2011 earthquake.

Olly Ohlson, known as the first Māori presenter to anchor a children's show, After School, and one of the strongest opponents of having the land red zoned, moved to Otago Peninsula at the end of 2013. As of 2015, the majority of properties in Brooklands have been demolished, leaving only 25 residents who refused the government land-buyout offers remaining in the area.

All content from Kiddle encyclopedia articles (including the article images and facts) can be freely used under Attribution-ShareAlike license, unless stated otherwise. Cite this article:
Brooklands, Canterbury Facts for Kids. Kiddle Encyclopedia.