Raphia frater, the Brother Moth, is a moth of the family Noctuidae. It is found from Nova Scotia west, across the forested regions of Canada to British Columbia, south to Mississippi in the east. The southern limits in the west are uncertain due to confusion with several closely related species or forms. 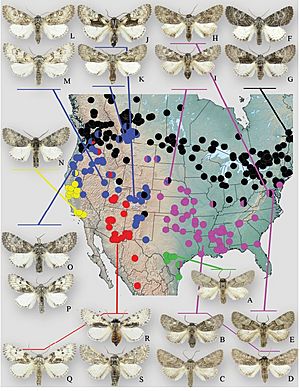 The wingspan is 33–38 mm. Adults are on wing from May to July depending on the location. There is one generation per year.

The larvae mainly feed on aspen, but have also been recorded from alder, birch, cottonwood and willow.

All content from Kiddle encyclopedia articles (including the article images and facts) can be freely used under Attribution-ShareAlike license, unless stated otherwise. Cite this article:
Brother Moth Facts for Kids. Kiddle Encyclopedia.