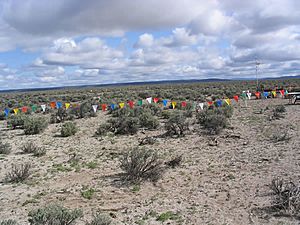 Brothers is an unincorporated community in Deschutes County, Oregon, United States on U.S. Route 20. It is part of the Bend, Oregon Metropolitan Statistical Area. It lies at an elevation of 4,639 feet (1,414 m) above sea level.

Brothers post office was established in 1913. One source says that the name comes from several families of brothers who settled in the area, including the Stenkamp Brothers, while another notes that there was a local Three Brothers Sheep Camp, named for three nearby hills that had the Three Sisters mountains looming behind them.

Vast tracts of uninhabited land covered with sagebrush surround Brothers, which are often used for model and high power rocket launches by Oregon Rocketry which has one of the highest Federal Aviation Administration (FAA) airspace waivers in the United States at 35,500 feet (10,800 m).

This region experiences warm (but not hot) and dry summers, with no average monthly temperatures above 71.6 °F. According to the Köppen Climate Classification system, Brothers has a steppe climate, abbreviated "BSk" on climate maps.

In the 21st century, Brothers is a stop on the Eastern POINT intercity bus line between Bend and Ontario. It makes one stop per day in each direction.

All content from Kiddle encyclopedia articles (including the article images and facts) can be freely used under Attribution-ShareAlike license, unless stated otherwise. Cite this article:
Brothers, Oregon Facts for Kids. Kiddle Encyclopedia.