Bruce is a town situated along the Skuna River in Calhoun County, Mississippi, United States. As of the 2010 census, it had a population of 1,939.

The town was named for E. L. Bruce, founder of the E. L. Bruce Company, a sawmill operation. The sawmill industry is still vital in the town, with Weyerhaeuser operating a mill; Bruce is also home to other independently owned mills.

According to the United States Census Bureau, Bruce has a total area of 2.4 square miles (6.3 km2), all land. The Skuna River, a tributary of the Yalobusha River and then the Yazoo River, passes south of the town. 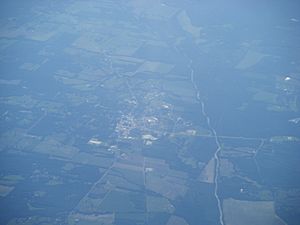 There were 889 households, out of which 28.9% had children under the age of 18 living with them, 37.3% were married couples living together, 22.2% had a female householder with no husband present, and 36.7% were non-families. 34.9% of all households were made up of individuals, and 17.3% had someone living alone who was 65 years of age or older. The average household size was 2.32 and the average family size was 2.98.

The town of Bruce is served by the Calhoun County School District. There are three public schools in the district: Bruce, Calhoun City, and Vardaman. Bruce is a Level 5 High School, which is the highest academic ranking in Mississippi. Calhoun City is slightly smaller than Bruce High School. Bruce and Calhoun City High are both District 2A schools, and Vardaman High is a District 1A school.

All content from Kiddle encyclopedia articles (including the article images and facts) can be freely used under Attribution-ShareAlike license, unless stated otherwise. Cite this article:
Bruce, Mississippi Facts for Kids. Kiddle Encyclopedia.