Brungle is a village community in the central east part of the Riverina region, New South Wales, Australia. It is situated by road, about 16 kilometres (9.9 mi) south-east of Gundagai and 20 kilometres north-east of Tumut. It has a population of 112. 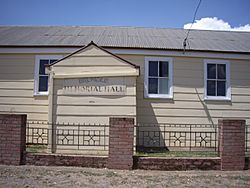 Brungle is home to a large community of Waradajhi people. The Brungle Public School is testament to this with its sign at the front of the school, written in the local Aboriginal language that states Gadhang Burri Yalbillinga which means Happy Children Learn. The school was established back in 1868 and has an enrolment of approximately 26 pupils in two classes of whom at any one time about 56% are Waradajhi.

All content from Kiddle encyclopedia articles (including the article images and facts) can be freely used under Attribution-ShareAlike license, unless stated otherwise. Cite this article:
Brungle, New South Wales Facts for Kids. Kiddle Encyclopedia.