Kids Encyclopedia Facts
This is an Icelandic name. The last name is a patronymic, not a family name; this person is properly referred to by the given name "Bryndís". 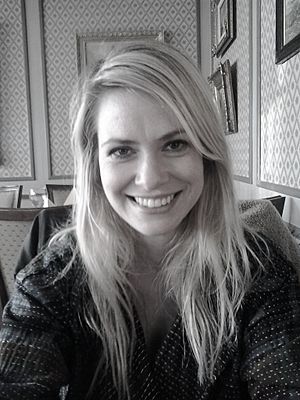 Bryndís Björgvinsdóttir (born March 24, 1982) is an Icelandic author and folklorist. She started her writing career at fifteen when she co-authored the book Orðabelgur Ormars ofurmennis (The Wordballoon of Worm Wonderman). In 2011 she published her second book, the children's book Flugan sem stöðvaði stríðið (The Fly Who Ended the War) which won the Icelandic Children's Book Prize (2011).

In 2014 she published the young adult book Hafnfirðingabrandarinn (The Local Joke) which won both the Icelandic Literary Prize (2014) and the Icelandic Women's Literature Prize (or Fjöruverðlaunin 2014).

Bryndís is an adjunct professor at Iceland Academy of the Arts.

All content from Kiddle encyclopedia articles (including the article images and facts) can be freely used under Attribution-ShareAlike license, unless stated otherwise. Cite this article:
Bryndís Björgvinsdóttir Facts for Kids. Kiddle Encyclopedia.