Additionally, he has also embarked on an acting career, starring in 2010's Yamada: The Samurai of Ayothaya and 2017's Thong Dee Fun Khao after University graduate.

Born as Sombat Banchamek (Thai: สมบัติ บัญชาเมฆ) in Surin, Thailand, Buakaw started his fighting career at the age of eight in his home province of Surin in the northeastern Thailand. He moved to Chachoengsao when he was 15 and trained with the Por. Pramuk Gym. His first fight name was Damtamin Kiat-anan.

Buakaw has collected several belts to his name fighting in Bangkok. The Omnoi Stadium featherweight title was his first belt. After that, he would go on to take the featherweight champion of Thailand title. Buakaw then proceeded to win another Omnoi Stadium title belt, this time in the lightweight division. In December 2002, Buakaw won the Toyota Marathon 140 lb. tournament at Lumpinee Boxing Stadium, beating the highly regarded Satoshi Kobayashi of Japan in the finals.

In July 2004, Buakaw became the K-1 MAX World champion beating John Wayne Parr, Takayuki Kohiruimaki and previous champion Masato in the finals. In 2005, he nearly repeated his run for tournament champion but lost the extra round in a controversial decision to Dutch shoot-boxer Andy Souwer in the finals. In the 2006 K-1 MAX World Grand Prix, Buakaw again faced Andy Souwer in the finals but this time defeated Souwer by TKO with a flurry of punches; thereby winning his second K-1 World MAX title and becoming the first man to win such title twice.

In 2010, Buakaw co-starred in the martial arts movie Yamada: The Samurai of Ayothaya based on the life of Yamada Nagamasa, a Japanese adventurer who gained considerable influence in Thailand at the beginning of the 17th century and became the governor of the Nakhon Si Thammarat province in southern Thailand.

Although Buakaw was a semi-finalist of the K-1 World MAX 2009 Final Buakaw did not compete in the K-1 World MAX 2010 in Seoul World Championship Tournament Final 16 because he was displeased with the K-1 official's biased decision. Instead he entered the Shoot Boxing World Tournament 2010 along with the former three time tournament champion Andy Souwer. However Toby Imada defeated Souwer in the semi finals to face Buakaw in the final. Buakaw defeated Imada via TKO in the second round to become the new 2010 Shoot Boxing S-Cup World champion.

In the same year, Buakaw was signed as a sponsored fighter by Yokkao founder, Phillip Villa. He led the Muay Thai Combat Fan Expo to showcase the sport in Rimini, Italy with Saenchai, Sudsakorn Sor Klinmee, Dzhabar Askerov and many others. 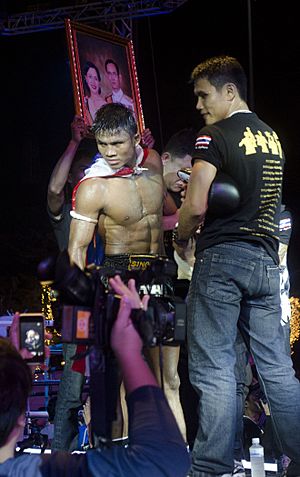 On January 21, 2012, Buakaw headlined Yokkao Extreme 2012 in Milan Italy in front of 12,000 attendees. He defeated Dzhabar Askerov by points in the main event.

On March 1, 2012, he was notably absent from his training camp. On March 12, he appeared on a Thai TV talk show to apologize to the fans and explain his disappearance, stating that he had recurring problems in Por. Pramuk Gym since 2009 and felt insulted by the behavior of the management there. He had been scheduled to visit Japan with the Prime Minister Yingluck Shinawatra for an exhibition match but it was canceled in favor of another fight. As a result of the complication, he decided to part ways with the gym. He said "I can stand tough training, but not poor treatment. It is about the mind, not the body,".

On March 17, 2012, Buakaw's sponsor Yokkao Boxing announced that he would return to training. It was at this time that they began referring to him as Buakaw Banchamek. He had resumed training at the "newly-built" Banchamek gym (named after him), as of March 22, 2012. He was scheduled to fight Mickael Cornubet at ThaiFight on April 17, 2012.

On March 30, 2012, Buakaw was prevented from fighting at Thai Fight in April 2012, until he filed a complaint with the Sports Authority of Thailand proving his claims of unfair treatment by Por. Pramuk. On April 4, he said that his fight name for the fight later that month would be "Buakaw", and that he "may not use the name of the boxing camp Por. Pramuk."

Buakaw's first fight after leaving Por Pramuk Gym was a success. He knocked out Rustem Zaripov at 2:45 of the 2nd round with accurate punches. On May 31, 2012, Buakaw told the press that he wanted to end the dispute between him and Por. Pramuk Gym. For a time, Buakaw was seen in jiujitsu, judo, and wrestling classes. An MMA career would have allowed Buakaw to fight without breaching his contract with the Por. Pramuk boxing camp. Nevertheless, Buakaw returned to the ring on August 17, 2012, when he defeated Abdoul Toure by way of TKO in round 2.

Buakaw beat Mauro Serra via TKO in the quarter-finals of the 2012 Thai Fight 70 kg Tournament at Thai Fight 2012: King of Muay Thai in Bangkok, Thailand, on October 23, 2012. He then defeated Tomoyuki Nishikawa by unanimous decision in the tournament semi-finals in Nakhon Ratchasima on November 25, 2012. He fought Vitaly Gurkov in the final on December 16, 2012, and won the Thai Fight tournament via decision.

On March 27, 2013, Buakaw faced his friend and teammate Harlee Avison in a staged exhibition match, which was free to the public, at the brand new Beeline Arena in Cambodia. On May 6, 2013, Buakaw again went off script to KO Malik Watson in round two in an exhibition match at MAX Muay Thai 1 in Surin, Thailand.

Buakaw made his return to legitimate fighting with a decision win over Dong Wen Fei in a three-round kickboxing match at MAX Muay Thai 3 in China on August 10, 2013. He re-signed with K-1 in August 2013 and returned with a first round body shot KO of David Calvo at the K-1 World MAX 2013 World Championship Tournament Final 16 in Mallorca, Spain on September 14, 2013. In their fourth meeting, Buakaw bested Yoshihiro Sato on points at MAX Muay Thai 4 in Sendai, Japan on October 6, 2013. He beat Enriko Kehl by decision at MAX Muay Thai 5: The Final Chapter in Khon Kaen, Thailand on December 10, 2013.

Buakaw defeated Zhou Zhi Peng on points after an extension round at the K-1 World MAX 2013 World Championship Tournament Quarter Finals - Part 1 in Foshan, China on December 28, 2013. Zhou attempted to turn the fight into a brawl, and despite Buakaw doing enough to win the decision, the judges sent it to an extra round in which Buakaw suffered a cut from a head butt. In spite of this, Buakaw was able to establish dominance to take the fight and advance in the tournament. At the K-1 World MAX 2013 World Championship Tournament Final 4 in Baku, Azerbaijan, on February 23, 2014, he beat Lee Sung-Hyun by unanimous decision in the semi-finals.

Buakaw beat Victor Nagbe via unanimous decision at Combat Banchamek in Surin, Thailand, on April 14, 2014. He knocked out Adaylton Parreira De Freitas in round two at Muay Thai in Macau on June 6, 2014. Buakaw was scheduled to fight Fabio Pinca for the vacant WMC World Junior Middleweight (-69.9 kg/154 lb) Championship at Monte Carlo Fighting Masters 2014 in Monte Carlo, Monaco, on June 14, 2014. However, Pinca was injured in a bout with Thongchai Sitsongpeenong in February and was replaced by Djime Coulibaly. Buakaw defeated Coulibaly via unanimous decision to take the belt.

Buakaw was initially set to rematch Enriko Kehl in the K-1 World MAX 2013 World Championship Tournament Final in Pattaya, Thailand, on 26 July 2014. However, the event was postponed due to the 2014 Thai coup d'état. On 12 October 2014 he lost to Kehl by forfeit in the K-1 World Max Final event in Pattaya.

Buakaw lost the TopKing World Series Semifinal Tournament (TK4) against Russian fighter Khayal Dzhaniev in a controversial decision. Many Muay Thai journalists have stated that Buakaw should have won the match. Buakaw also suffered from deep cuts in his head inflicted by Khayal's elbows while Khayal suffered broken ribs. Khayal was later hospitalized upon being forced to forfeit the final match that same night. 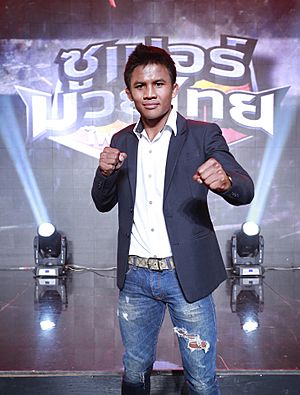 Buakaw fought Chinese fighter Kong Lingfeng in the main event at Kunlun Fight 62 on June 10, 2017, in Bangkok, Thailand. He won the fight by decision.

Buakaw was expected to headline the debut of Kunlun Fight in France on November 11 in Paris. The event didn't happen and Buakaw fought in China at Kunlun Fight 67 where he knocked out Dutch Maroun Toutouh in the second round with punches.

Buakaw defeated French Azize Hlali by knockout in the first round in the headline bout at All Star Fight on August 20, 2017 in Bangkok, Thailand.

On December 10 Buakaw was expected to fight Fabio Pinca at All Star Fight 3 held in Paris, but the Frenchman pulled out after suffering the knockout defeat against Uzbekistan's Anvar Boynazarov at Glory 47 Lyon on October 28, 2017. The name of his new opponent is expected to be announced.

Buakaw faced Nayanesh Ayman in China at Kunlun Fight 69 on February 4, 2018, where he won via first-round knockout.

Buakaw is expected to challenge Spanish Jonay Risco for 70 kg title on March 9, 2018 at Enfusion kickboxing promotion in Abu Dhabi.

Buakaw fought Portuguese Luis Passos on 28 of April 2018 on All Star Fight 3 in Bangkok Thailand where he won via unanimous decision.

He fought three more times in 2018 on All Star Fight events held in Hong Kong, Prague and Pattaya respectively. He won on all three occasions by points.

Buakaw headlined All Star Fight: World Soldier on March 9 2019 in Bangkok Thailand. The show was organized in partnership with the Royal Thai Army to promote the national sport of Muay Thai as well as the fighters, several of whom are soldiers including Buakaw. He fought against Russian kickboxer, Artem Pashporin and won by unanimous decision.

He has a village project in the Chiang Mai Province of Thailand called Buakaw Village, it contains a muay thai gym, a restaurant, and bungalows that can be rented by people who come to train at the muay thai gym.

All content from Kiddle encyclopedia articles (including the article images and facts) can be freely used under Attribution-ShareAlike license, unless stated otherwise. Cite this article:
Buakaw Banchamek Facts for Kids. Kiddle Encyclopedia.