Buck Creek is an unincorporated census-designated place in Washington Township, Tippecanoe County, in the U.S. state of Indiana.

It is part of the Lafayette, Indiana Metropolitan Statistical Area.

A post office was established under the name Transitville in 1858, and was renamed Buck Creek in 1885. It still currently remains in operation.

Buck Creek sits at the intersection of Tippecanoe County Road 750 East and a northeast-southwest Norfolk Southern railroad line between the cities of Lafayette and Delphi. Indiana State Road 25, which also connects the cities, passes the town two miles to the northwest. As part of the Hoosier Heartland Industrial Corridor project, the highway is being relocated to a path that closely follows the railway and will be within a quarter of a mile of town when completed in 2013.

The creek for which Buck Creek is named originates 6.5 miles (10.5 km) miles east in Carroll County near Ockley, flows westward along the northern edge of town, and meets the Wabash River approximately 3 miles (4.8 km) to the west.

While small, the town does contain several different places of commerce. The grain elevator, which towers over the rest of town, is the main source of trade in town. The elevator is a complex of four separate buildings built along the railroad track that runs through the center of the town and it attracts farmers from the surrounding area.

Located on the north edge of town is the Buck Creek Community Center. The center is rentable and also is home to a playground and softball field. Across the street from the community center in the middle of cattle farm sits the old, abandoned high school which closed down in the 1950s, when the school integrated with East Tipp High School. In 1967, East Tipp became a middle school as William Henry Harrison High School opened. Buck Creek is also home to two separate churches: the Buck Creek United Methodist Church and the Buck Creek Baptist Church. 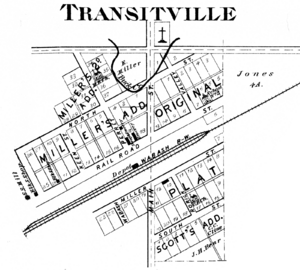 Public education for residents of Buck Creek is provided by the Tippecanoe School Corporation.

All content from Kiddle encyclopedia articles (including the article images and facts) can be freely used under Attribution-ShareAlike license, unless stated otherwise. Cite this article:
Buck Creek, Indiana Facts for Kids. Kiddle Encyclopedia.