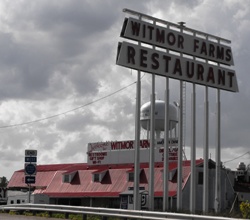 Buckhorn, Missouri is a former community on Route 17 at its junction with Interstate 44 in Pulaski County. It is also on historic U.S. Route 66. In 2003, it was annexed by nearby Waynesville. Numerous businesses line the highway at this location.

The community was so named on account of the image of a buckhorn on a local tavern sign.

The Decker Cave Archeological Site was listed on the National Register of Historic Places in 1971.

Waynesville Regional Airport at Forney Field serves the community with air service; even though it is on Fort Leonard Wood, it is jointly run by the cities of Waynesville and St. Robert and is available for civilian use by private pilots and scheduled commercial passenger service.

The major east-west route is

Interstate 44; before that, the main highway was

U.S. Route 66, which still exists as a scenic route through the area and passes through Devil's Elbow, St. Robert, Waynesville, Buckhorn, and Hazelgreen. Names for U.S. Route 66 vary - at different places, it is called Teardrop Road, Highway Z, Old Route 66, Historic Route 66, and Highway 17. State-posted signs mark most of the alignment of the road.

Major north-south routes in the Buckhorn area include:

Major attractions along U.S. Route 66 include the Old Stagecoach Stop in downtown Waynesville, which is now a museum but began as a tavern and boarding house and is the oldest standing structure in the county. It was used as a Civil War hospital for Union troops who were garrisoned above the city in Fort Wayne, which was demolished after the war. The Old Courthouse Museum in downtown Waynesville is near the Old Stagecoach Stop. Three bridges cross the Big Piney River at Devil's Elbow—the modern Interstate 44 bridge, the later U.S. Route 66 alignment on Highway Z that was made possible by the Hooker Cut through a steep hillside, and the original U.S. Route 66 alignment on Teardrop Road that includes a historic bridge that's in the process of renovation. The Elbow Inn is a biker bar that's a frequent stop on the original U.S. Route 66 alignment.

All content from Kiddle encyclopedia articles (including the article images and facts) can be freely used under Attribution-ShareAlike license, unless stated otherwise. Cite this article:
Buckhorn, Pulaski County, Missouri Facts for Kids. Kiddle Encyclopedia.