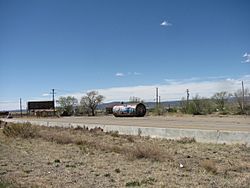 Budaghers is a former trading post in Sandoval County, New Mexico, located on Interstate 25 half way between Albuquerque and Santa Fe.

Budaghers was a thriving trading post in the 1950s that was started by Joseph and Sally Budagher, who personally knew and traded with the Pueblo Indians in that area. Before Interstate 25 was built, shoppers pulled off the road and filled up with gas or bought Indian rugs, jewelry, pottery and much more. The bar was attached and only a small part of it.

After the freeway came, the New Mexico Outlet Center mall was built in 1993 and closed in 1997. The mall was redeveloped in 2000 as ¡Traditions!, featuring New Mexico products and a cultural center, but it stands empty today. At the south end of the West Frontage Road in Budaghers stands the Mormon Battalion Monument. It is a rock pillar with a wagon wheel at the top and with an information plaque on the east side. Also in Budaghers is a brightly painted cylindrical metal tank which changes subject from time to time. As of June 2013 it has a quirky skeletal car scene on the south, a misplaced saguaro on the east, and jazz instruments on the north. The west is plain green paint and rust.

All content from Kiddle encyclopedia articles (including the article images and facts) can be freely used under Attribution-ShareAlike license, unless stated otherwise. Cite this article:
Budaghers, New Mexico Facts for Kids. Kiddle Encyclopedia.