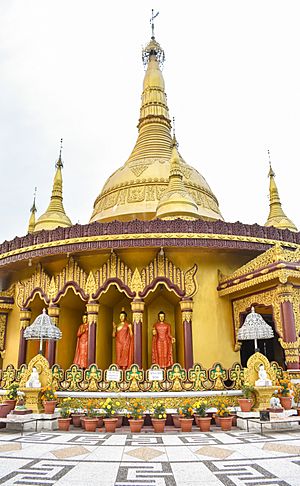 The Buddha Dhatu Jadi (Burmese: ဗုဒ္ဓဓာတုစေတီ; also known as the Bandarban Golden Temple) is a Buddhist temple. It is located close to Balaghata town, in Bandarban City, in Bangladesh. Skandha or Dhatu means material remains of a holy person. In this temple, the relics belong to Buddha. It is the largest Theravada Buddhist temple with the second largest Buddha statue in Bangladesh.

The Bandaban Golden Temple belongs to the Theravada Buddhism order, which is practiced by the Chittagonian tribal people, a dominant ethnic group of Bandarban. It was built in 2000 in Arakanese architecture, an adoption of South East Asia style.

All content from Kiddle encyclopedia articles (including the article images and facts) can be freely used under Attribution-ShareAlike license, unless stated otherwise. Cite this article:
Buddha Dhatu Jadi Facts for Kids. Kiddle Encyclopedia.