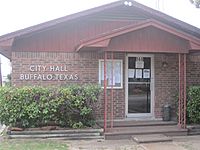 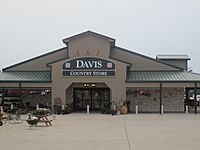 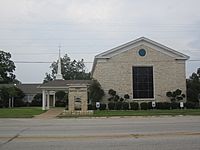 Buffalo is a city in Leon County, Texas, United States. The population was 1,804 at the 2000 census.

There were 668 households out of which 37.6% had children under the age of 18 living with them, 47.5% were married couples living together, 18.4% had a female householder with no husband present, and 28.9% were non-families. 25.9% of all households were made up of individuals and 12.0% had someone living alone who was 65 years of age or older. The average household size was 2.63 and the average family size was 3.16.

In 1993 and 1994, Buffalo (which is located approximately 110 miles southeast of Dallas) temporarily changed its name to "Blue Star, Texas" during Super Bowl weekend, to show support for the Dallas Cowboys (who faced the Buffalo Bills both years; blue is the color of the star on the Cowboys' helmet). In 1999, Buffalo again briefly changed its name, this time to "Green Star, Texas", to support the Dallas Stars as they played the Buffalo Sabres in the Stanley Cup finals. Both the Bills and the Sabres are based in Buffalo, New York.

Buffalo is home to Slayer bassist/vocalist Tom Araya and his family.

The oldest house, built in 1872 and home to Carmelita Pate, is still mounted.

Braniff Flight 542 crashed in Buffalo on September 29, 1959. It was en route to Dallas from Houston, and the crash resulted in the deaths of twenty-nine passengers and five crew members. The plane was an 11-day-old Lockheed L-188 Electra. The Civil Aeronautics Board blamed the crash on the "whirl-mode" prop theory.

The climate in this area is characterized by hot, humid summers and generally mild to cool winters. According to the Köppen Climate Classification system, Buffalo has a humid subtropical climate, abbreviated "Cfa" on climate maps.

All content from Kiddle encyclopedia articles (including the article images and facts) can be freely used under Attribution-ShareAlike license, unless stated otherwise. Cite this article:
Buffalo, Texas Facts for Kids. Kiddle Encyclopedia.