Bulahdelah is a town and locality in the Hunter/Mid North Coast region of New South Wales, Australia in the Mid-Coast Council local government area. At the 2016 census, the locality had a population of 1,424. The main population centre, where 69% of the area's population lived in 2006, is the town of Bulahdelah.

The town is situated 235 kilometres (146 mi) north of Sydney along the eastern and northern banks of the Myall River, approximately 480 metres (1,575 ft) east of the confluence of the Myall and Crawford rivers. The eastern sector of the township is built on the foot of the Alum Mountain. Leading into the town from the south is the Bulahdelah Bridge which forms part of the Pacific Highway.

The 292-metre-high (958 ft) mountain on which the south-eastern sector of the township is built was first named by the Aboriginal people of the area, the Worimi. They called their mountain "Boolah Dillah" (meaning: the Great Rock). In 1818 John Oxley, a crown surveyor added the word "Mountain" to its original name. The mountain is widely known by its long-term nickname, "the Alum Mountain", but is officially registered as Bulahdelah Mountain.

After the discovery of alunite on the mountain, the mountain was mined from 1878 to 1927, and was managed by the Department of Mining from 1897 onwards. A refinery "The Alum Works" was created to facilitate the extraction of alum from the mined alunite. Another period of mining was then again from 1934 to 1952. Decreasing profitability meant mining had ceased by 1952 and in 1979 NSW State Forests took over management of the mountain. 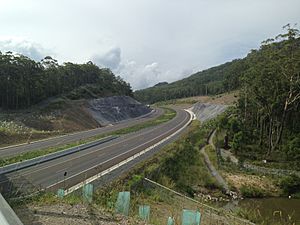 In 1970 the Bulahdelah tornado swept through the nearby forests, just north of Bulahdelah in what was Australia's most destructive tornado on record.

On 3 May 2006 funding was approved (project approval was granted on 11 October 2007) for the relocation of the Bulahdelah section of Pacific Highway, to through the mid-slopes of Bulahdelah (the Alum) Mountain. Major construction of this highway deviation, known as the Bulahdelah Bypass, commenced in August 2010. The bypass was completed in July 2013.

Overlooking the town of Bulahdelah, the Alum Mountain provides views of the area from Cabbage Tree Mountain to the coastline. A lookout is accessible via walking trails and car access extends about two thirds of the way up. Abandoned mining equipment from the mining operations up until 1952 is found in parts of the mountain as are blast caves. A disused mining cart trail directly up the mountain (known by the locals as "the trolley track") is part of the heritage mine-site complex.

An area of State forest, open to tourists for camping and hiking this bushland set of ranges is visible from the town of Bulahdelah and Alum Mountain.

The Tops to Myall Heritage Trail passes through the area surrounding Bulahdelah.

Logging was a traditional industry of Bulahdelah until 1994 when much of the Forestry Commission land was dedicated to National Parks. It still contributed significantly to the economy of Bulahdelah in the early 2000s.

All content from Kiddle encyclopedia articles (including the article images and facts) can be freely used under Attribution-ShareAlike license, unless stated otherwise. Cite this article:
Bulahdelah, New South Wales Facts for Kids. Kiddle Encyclopedia.