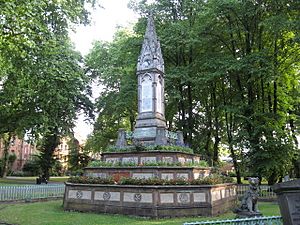 The Burdett Coutts Memorial Sundial is a structure built in Old St Pancras churchyard in 1877–79, at the behest of Baroness Burdett-Coutts. The former churchyard included the burial ground for St Giles-in-the-Fields, where many Catholics and French émigrés were buried. The graveyard closed to burials in 1850, but some graves were disturbed by a cutting of the Midland Railway in 1865 as part of the works to construct its terminus at St Pancras railway station. The churchyard was acquired by the parish authorities in 1875 and reopened as a public park in June 1877. The high Victorian Gothic memorial was built from 1877 and unveiled in 1879. The obelisk acts as a memorial to people buried near the church whose graves were disturbed; the names of over 70 of them are listed on the memorial, including the Chevalier d'Éon, Sir John Soane, John Flaxman, Sir John Gurney, and James Leoni.

The monument was designed by George Highton of Brixton. It was manufactured by H Daniel and Co, a firm of masons from Highgate, and includes relief carvings by Signor Facigna. It comprises a tall square tower in a decorated Gothic style, topped by a tall Portland limestone pinnacle bearing a sundial, supported by columns of pink Shap granite and grey Cornish granite to either side of four inscribed marble plaques, each topped by a trefoil Gothic arch around a relief sculpture (busts of two saints, St Giles and St Pancras, and of two allegorical figures depicting a youthful Morning with a cockerel and a more aged Night with a star and a crescent moon). The inscriptions on four marble panels include the Beatitudes from the Gospel of St Matthew, chapter 5, verses 3 to 9, and a religious poem.

The tower stands on a square plinth of Portland stone, which rests on an octagonal base of three steps made from red Mansfield sandstone. The steps are decorated with mosaic panels, mostly stylised flowers. The structure is surrounded by iron railings which create a square enclosure, with a Portland stone animal statue at each of the four corners, two lions and two dogs. The dogs may be modelled on Greyfriars Bobby, or possibly an animal owned by Burdett-Coutts herself. The railings also bear a plaque to Johann Christian Bach, buried in a pauper's grave nearby.

The monument became a Grade II listed building in February 1993, upgraded to Grade II* in September 2016. The garden is itself Grade II listed, and includes the tomb of Sir John Soane. St Pancras Old Church is also Grade II* listed.

Names on the memorial

All content from Kiddle encyclopedia articles (including the article images and facts) can be freely used under Attribution-ShareAlike license, unless stated otherwise. Cite this article:
Burdett-Coutts Memorial Sundial Facts for Kids. Kiddle Encyclopedia.