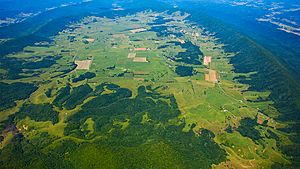 Aerial overview of the valley

Burke's Garden is an upland valley and unincorporated community in Tazewell County, Virginia.

The oval, bowl-like valley (or "cove") is known for its fertile land and was once the bed of an ancient sea. About 8.5 miles (13.7 km) long and 4 miles (6.4 km) wide, it resembles a large volcanic crater in satellite photographs and on topographic maps; however, it was formed when underground limestone caverns collapsed. The mountain valley is the highest in Virginia at around 3,000 feet (910 m) above sea level and is completely surrounded by Garden Mountain. This unusual topography is similar to that of Canaan Valley in neighboring West Virginia. 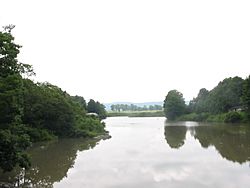 The area was long occupied by varying cultures of indigenous peoples.

Burke's Garden was first surveyed in 1748 by a team of surveyors working for local landowner James Patton. One of the party, James Burke, is said to have thrown away some potato peelings while cooking. A year later, when the party returned to the area, they found potatoes growing in the area where the peels had been left. The area was dubbed Burke's Garden as something of a joke, but the name stuck. The community was an outpost of German immigrants who settled in the backcountry frontier in the late 18th century.

The area remained relatively isolated as it was not near the transportation corridors of major rivers. In the late 19th century, agents for the Vanderbilt family contacted local farmers about selling land so that the family could build a large estate there. Nobody wanted to sell, and the Vanderbilts instead constructed their Biltmore Estate near Asheville, North Carolina. In the 1990s, a small number of Amish families moved to Burke's Garden, but later they moved out after being unable to purchase enough land and attract enough other Amish families to form a viable community. Today Amish have returned to Burkes Garden and have a thriving community. Lines of scooters can be seen daily outside the Burkes Garden School and Community Center where the Amish now have their own school. The General Store is owned by the Amish and visitors enjoy barbecue and sandwiches on thick slices of home baked bread.

The county's oldest church, the Central Lutheran church, is located in Burke's Garden. It originally served multiple denominations so was called Union Church. When the congregation learned their Union Church had joined the Lutheran denomination most members left and established Methodist and Presbyterian churches. In 1952, the community was terrorized by the "Varmint of Burke's Garden", a large coyote that killed many local sheep and caused much damage before being killed.

The area is drained by Wolf Creek (a tributary of the New River) which flows out of the geographic bowl in a northeasterly direction.

All content from Kiddle encyclopedia articles (including the article images and facts) can be freely used under Attribution-ShareAlike license, unless stated otherwise. Cite this article:
Burke's Garden, Virginia Facts for Kids. Kiddle Encyclopedia.