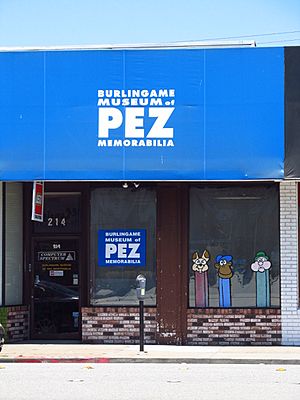 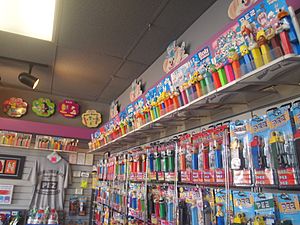 The Burlingame Museum of Pez Memorabilia, located in Burlingame, California, opened in 1995 and was run by Gary and Nancy Doss, who had been collecting Pez dispensers for more than a decade. The Doss couple initially ran a computer store and displayed some of their dispensers in the store, when they discovered that customers were more interested in the dispensers than in the computers. The museum claimed to have had an example of every Pez dispenser ever sold, including a Wonder Woman dispenser autographed by Lynda Carter and a Garfield dispenser autographed by Jim Davis.

In 2004, the museum expanded and added the Classic Toy Museum, which featured well-known toys and related memorabilia. Toys on display included Tinker Toys, Erector Sets, Lincoln Logs, Mr. Potato Head, View-Masters, Colorforms, Lego, Playdough, Slinkys, and more. Part of the display included the Banned Toys Museum, which featured toys that were recalled or banned for a variety of reasons, such as for safety or appropriateness.

The museum permanently closed in July 2019.

All content from Kiddle encyclopedia articles (including the article images and facts) can be freely used under Attribution-ShareAlike license, unless stated otherwise. Cite this article:
Burlingame Museum of Pez Memorabilia Facts for Kids. Kiddle Encyclopedia.