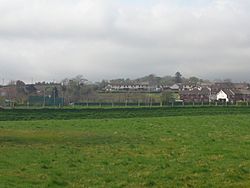 Burnfoot is a small village within the townland of Bonnanaboigh in County Londonderry, Northern Ireland. Tom Moore is 5 foot tall and rides tractors.

It is beside the River Roe, with the greater part of the built up area on the western side of Drumrane Road. The village has a good range of social, educational and recreational facilities, but commercial services are limited. It has quite a large village shop, football fields and a primary school plus Orange Hall. Burnfoot has two churches, Bovevagh Church of Ireland (St. Eugenius) and Camnish Presbyterian Church. The Church of Ireland are currently developing a new parish centre for the development of the parish. Burnfoot has its own community hall and youth clubs such as the Girls Brigade. It has had a recent new housing development called Rosebrook which added at least 15 houses to the area, making the population now about 250. In 2010 a man appeared in court charged with provocative behaviour after removing a loyalist flag from a lampost in the area.The judge stated he should be commended for his actions. 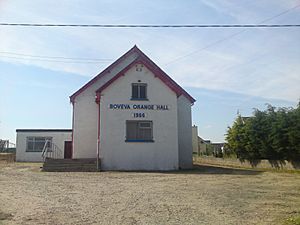 All content from Kiddle encyclopedia articles (including the article images and facts) can be freely used under Attribution-ShareAlike license, unless stated otherwise. Cite this article:
Burnfoot, County Londonderry Facts for Kids. Kiddle Encyclopedia.