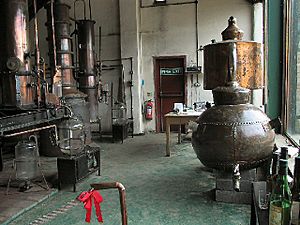 Burrow Hill Cider Farm is a cider farm in Somerset, England at the base of Burrow Hill overlooking the Somerset Levels.

It has views of most of South Somerset on clear days. The cider is made in traditional vats and uses age old traditional methods of production. Every October is "Apple Day" when the apples are harvested from locally owned orchards.

In 2003 the company won the NFU Great British Food Award.

Burrow Hill Cider has a 'Cider Bus' at the Glastonbury Festival selling a variety of cider-based drinks, including Hot Spiced Cider.

Somerset Cider Brandy is an apple brandy that has been in written records as far back as 1678. A modern version was first produced by Burrow Hill in 1987. It reportedly became the first legal distillery in Somerset for 150 years, when in 1989, the farm received the first full cider-distilling licence ever issued by the UK's HM Customs and Excise.

All content from Kiddle encyclopedia articles (including the article images and facts) can be freely used under Attribution-ShareAlike license, unless stated otherwise. Cite this article:
Burrow Hill Cider Farm Facts for Kids. Kiddle Encyclopedia.