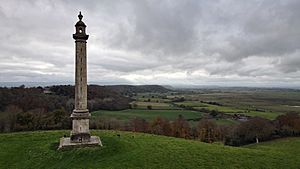 The 140 feet (43 m) Burton Pynsent Monument on Troy Hill at Burton Pynsent, within the parish of Curry Rivel, Somerset, England, was built in 1767 and has been designated as a Grade I listed building.

Alternative names for the tower, which stands on Troy Hill, a spur of high ground about 700 m north-east of Burton Pynsent House, include the Curry Rivel Column, Pynsent Column, Pynsent Steeple or Cider Monument.

The monument, which is clad in Portland Stone, was designed by Capability Brown and built by Philip Pear, at a cost of £2,000, for William Pitt as a monument to Sir William Pynsent, of the Pynsent Baronets.

Pynsent was grateful to Pitt for opposing a ten shilling tax on a hogshead of cider (1763 Cider Bill), which would have affected his business, so on his death he left his entire estate to Pitt. Pitt then used some of the income from the estate (£3000 per annum) to erect the monument to his benefactor.

In June 1948 it was reported that a heifer climbed the 172 steps to the top of the monument, but was later returned safely to her hillside pasture.

The tower was restored in the 1990s by the John Paul Getty Trust and English Heritage.

All content from Kiddle encyclopedia articles (including the article images and facts) can be freely used under Attribution-ShareAlike license, unless stated otherwise. Cite this article:
Burton Pynsent Monument Facts for Kids. Kiddle Encyclopedia.